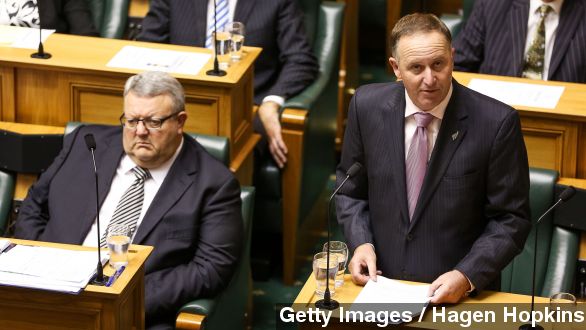 SMS
New Zealand Joins Fight Against ISIS, Sends Troops To Iraq
By Jake Godin
By Jake Godin
February 24, 2015
New Zealand has become the latest in a list of countries that are sending military personnel to Iraq to train and assist Iraqi and Kurdish soldiers.
SHOW TRANSCRIPT

"I will not ... will not stand by while Jordanian pilots are burned to death, when kids execute soldiers, when people are out there being beheaded. I'm sorry, but this is the time to stand up and be counted. Get some guts, and join the right side."

And with those words, New Zealand's Prime Minister John Key told his country's Parliament he will send 143 noncombat military personnel to Iraq to help fight ISIS.

The troops will be stationed at Camp Taji about 20 miles north of Baghdad. A statement from Prime Minister Key says the troops will likely be deployed in May and can only stay for a maximum of two years.

With Tuesday's announcement, New Zealand has joined a growing list of U.S.-led anti-ISIS coalition members who are sending military personnel to Iraq to train Iraqi and Kurdish soldiers.

The decision has brought up concerns over the potential dangers of putting "boots on the ground" in Iraq.

The New Zealand prime minister's opposition in Parliament warned that by sending military personnel to Iraq, Key was making New Zealanders a target for ISIS retaliation both in Iraq and at home.

Last month and again earlier in February, Canadian special forces came under fire by ISIS fighters and successfully repelled both attacks. It was one of the first instances where Western military personnel had engaged in direct combat with the militants.

While attempting to take a nearby town, ISIS militants also attacked the Ayn al-Asad Air Base where U.S. forces are training Iraqi soldiers. The Iraq Defense Ministry released this video of Iraqi Security Forces meeting evacuees from that town.

According to New Zealand's prime minister, between 35 and 40 New Zealanders are on a terror watch list.