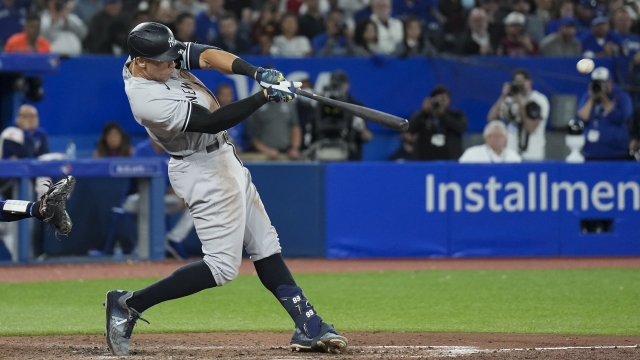 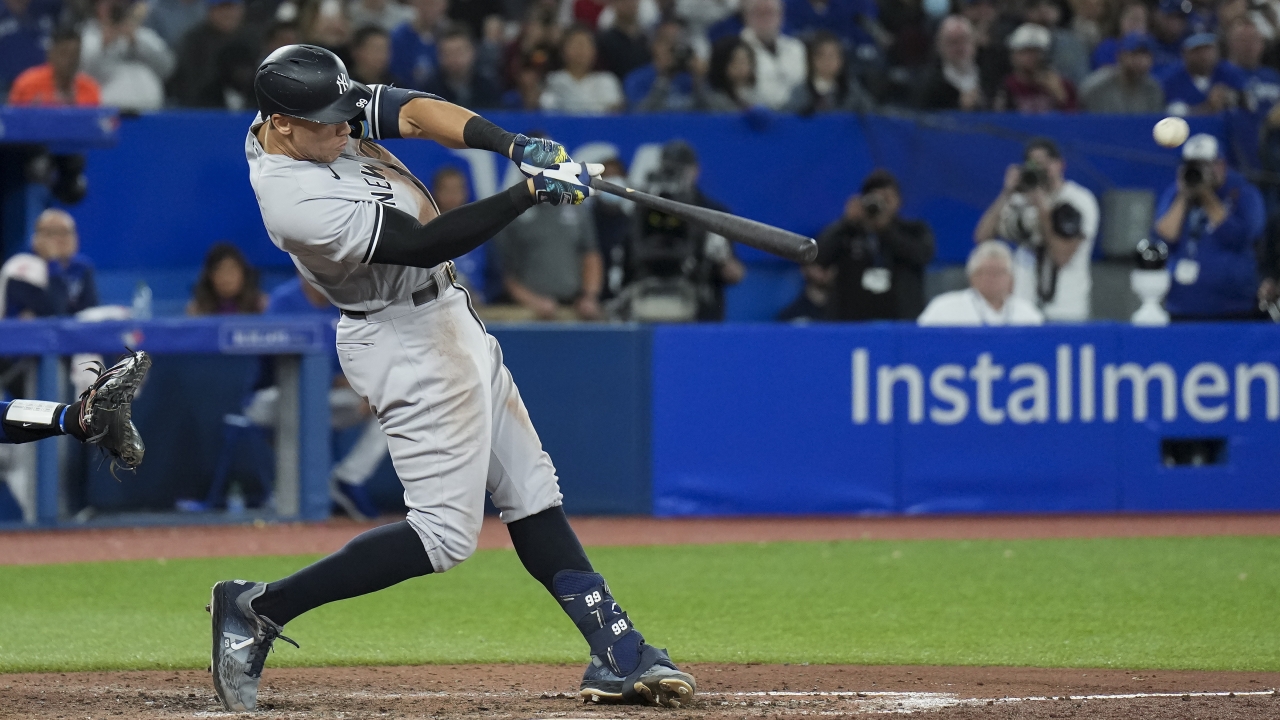 When Tim Mayza made a mistake pitch, Aaron Judge made sure the Blue Jays left-hander wound up on the wrong end of history.

The New York Yankees slugger tied Roger Maris’ American League record of 61 home runs in a season with a tiebreaking, two-run drive in the seventh inning that lifted the New York Yankees over the Toronto Blue Jays 8-3 on Wednesday night.

Mayza said he was trying to attack Judge with sinkers in the hopes of inducing a ground ball, but missed his spot.

“Just one too many good pitches over the plate to a really good hitter,” Mayza said.

The 30-year-old slugger drove a 94.5 mph belt-high sinker with a full-count from Mayza over the left-field fence at Rogers Centre. The 117.4 mph drive took just 3.8 seconds to land 394 feet from the plate, and it put the Yankees ahead 5-3.

“When I hit it, I thought I got enough, but it’s been a couple of games since I did that,” Judge said.

Judge watched the ball clank off the front of the stands, just below two fans who reached over a railing and tried for a catch. He pumped an arm just before reaching first and exchanged a slap with coach Travis Chapman.

The ball dropped into Toronto’s bullpen and was picked up by Blue Jays bullpen coach Matt Buschmann, who turned it over to the Yankees.

Judge’s mother and Roger Maris Jr. rose and hugged from front-row seats. He appeared to point toward them after rounding second base, then was congratulated by the entire Yankees team, who gave him hugs after he crossed the plate.

“As soon as he hit it I was like ‘OK, that’s gone,’” Maris Jr. said. “Then it was just a matter of enjoying him run the bases and giving his mom a big old hug and just enjoying the moment.”

Judge moved past the 60 home runs Babe Ruth hit in 1927, which had stood as the major league mark until Maris broke it in 1961. All three stars reached those huge numbers playing for the Yankees.

Barry Bonds holds the big league record of 73 for the San Francisco Giants in 2001.

Judge had gone seven games without a home run — his longest drought this season was nine in mid-August. This was the Yankees’ 155th game of the season, leaving them seven more in the regular season.

Judge is hitting .313 with 130 RBIs, also the top totals in the AL. He has a chance to become the first AL Triple Crown winner since Detroit’s Miguel Cabrera in 2012.

Toronto (87-69) held on to the top spot in the wild card race despite its second straight loss. The Blue Jays are 1 1/2 games ahead of Tampa Bay and two games in front of Seattle.

Gerit Cole (13-7) allowed three runs and three hits in 6 1/3 innings. Cole was perfect through five before Danny Jansen homered leading off the sixth. Cole struck out four, matching the Yankees season record of 248 set by Ron Guidry in 1978.

“I think it’s more special because of what Aaron did tonight,” Cole said.