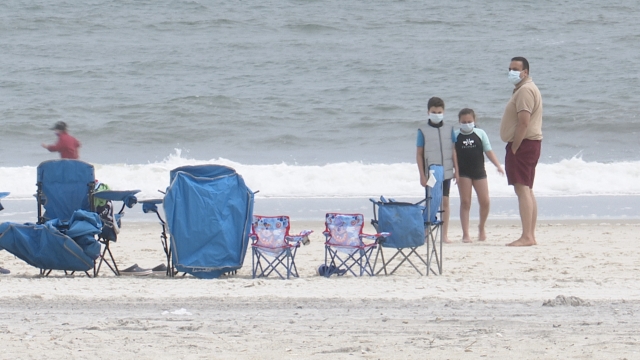 SMS
Reserved Parking and Police Patrols: Beaches Reopen for Memorial Day
By Nathaniel Reed
By Nathaniel Reed
May 25, 2020
Across the U.S., the decision whether to open beaches largely fell on local or state governments.
SHOW TRANSCRIPT

Most years, Memorial Day Weekend is the unofficial start of summer. For some, the ongoing pandemic seemed to have little effect.

In Texas, beachgoers packed the seafront and in Daytona Beach, Florida, police broke up a crowd of over 200 people, partying in the street.

In San Diego, as Newsy sister station KGTV reported, the beach looked like a flashback to last summer.

But at Jones Beach State Park in New York, a modified opening appeared to adhere to social distancing guidelines, with few exceptions.

On Memorial Day, Jones Beach was one of the largest beaches open near New York City, after Mayor Bill DeBlasio decided to keep the city’s beaches closed for the holiday weekend.

“No swimming, no parties, no sports, no gatherings,” DeBlasio announced in his daily press conference last week.  “If we start to see a lot of violations of those rules, the fences will come up on the beaches.”

On Monday, at Jones Beach, traffic cones filled up every other parking spot, designed to limit capacity to 50%.

Along the boardwalk, stores, rental shops, and cafes were all shuttered, and state police held frequent patrols.

Yet, swimmers were out playing in the waves, under the supervision of lifeguards.

“I think everybody was cooped up and wants to get summer started,” Jessica Stillwagon, of Queens, New York, told Newsy. “It was relaxing.”