Round 2? N.Y. Attorney General Is Investigating The Trump Foundation 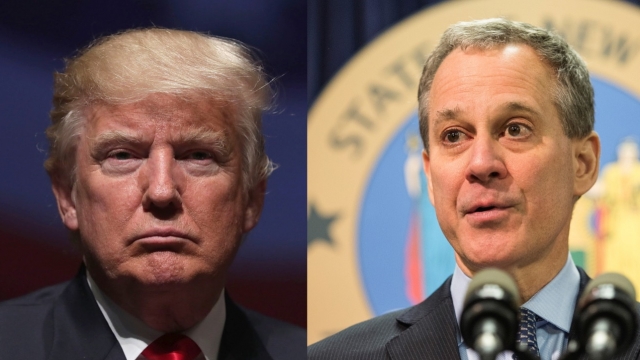 "We're dealing with an attorney general who everyone in New York knows is a total lightweight," Donald Trump said of Eric Schneiderman following the Trump University lawsuit filing.

"The thing was a scam from beginning to end, so it's a fraud," New York Attorney General Eric Schneiderman said of Trump University.

"We know he's a political hack. I know him very well. He comes up to my office looking for campaign contributions," Trump said of Schneiderman.

"Prosecutors are used to people making wild accusations," Schneiderman said of Trump's claims against him in 2013.

"We have been concerned that the Trump Foundation may have engaged in some impropriety from that point of view, and we've inquired into it," Schneiderman told CNN.

Trump has accused Schneiderman — who is a Democrat and Hillary Clinton supporter — of playing politics for pursuing the Trump University lawsuit. Schneiderman filed the lawsuit in 2013 — well before Trump announced his candidacy in 2015.

News of Schneiderman's latest investigation comes in the wake of The Washington Post's reporting on the foundation's "unusual" practices. It said the foundation paid for items for Trump, including a portrait of, well, himself. It also reported Trump hasn't made a donation to the organization since 2008.

And as has been previously reported, Trump has been accused of participating in a pay-to-play scheme. The foundation gave a $25,000 donation to a political group tied to Florida Attorney General Pam Bondi.

That revelation has raised questions as to whether Bondi's office didn't join Schneiderman's lawsuit against Trump due to the donation.

Bondi, her office and the Trump campaign have strongly denied the claim.

Regardless, nonprofits are prohibited from "directly or indirectly participating in, or intervening in, any political campaign on behalf of (or in opposition to) any candidate for elective public office."

Trump has since reportedly paid the IRS a $2,500 penalty stemming from the foundation's Bondi donation.