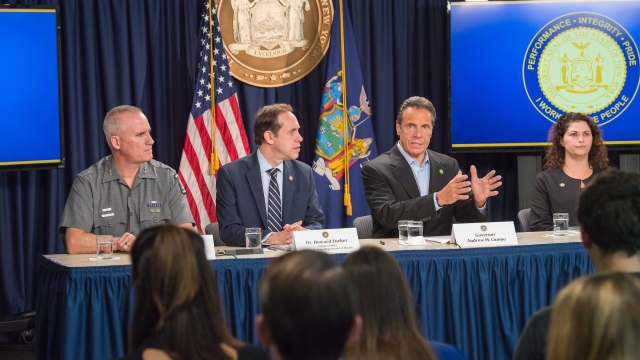 On Tuesday, New York became the first state to officially ban the sale of flavored e-cigarettes, with the exception of menthol or tobacco flavors. New York Gov. Andrew Cuomo and the state's Health Commissioner Dr. Howard Zucker proposed the ban as an emergency executive action on Sunday.

The state Public Health and Health Planning Council voted for the ban to take effect immediately.

New York has also taken steps recently to raise the smoking age to 21 instead of 18 and require anti-tobacco campaigns to include vaping.

Cuomo's office said retailers will have about two weeks to remove banned e-cigarettes and other vaping products from their stores. Starting on Oct. 4, the Department of Health will visit stores to enforce the ban.

Unless it's renewed, this emergency regulation will expire in 90 days. Cuomo has proposed legislation that would make the ban state law.

One store owner told The Associated Press that flavored e-cigarettes make up 95% of his business. He says manufacturers should be held accountable for teens using the product, not store owners. Another retailer said the black market vape liquids are to blame for a recent outbreak of lung illnesses, not the items he sells.

Under Cuomo's executive order, any retailer caught selling tobacco or vaping products to underage customers will face both civil and criminal penalties. They could be fined up to $2,000 per unit of flavored e-liquid that is possessed, manufactured, sold or offered for sale. Cuomo said, "That crackdown is going to be aggressive, and it's going to start now."

The governor also said New York State Police will partner with the Department of Health to conduct undercover investigations to catch retailers selling to underage customers. He also wants to advance legislation to curtail deceptive marketing of e-cigarettes targeting teens and children.

Michigan has approved a similar ban, but it hasn't been enforced yet. And unlike New York, it would ban menthol- and tobacco-flavored products. California's governor also recently announced an executive order to ban flavored e-cigarettes, but it will need legislative approval to take effect.

The Trump administration recently announced efforts to block the sale of all non-tobacco-flavored vaping products.

Seven deaths in the U.S. have been linked to vaping, and the CDC says 380 cases of vaping-related illnesses have been reported.