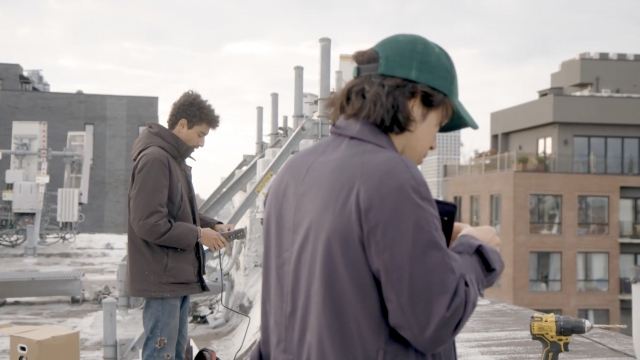 SMS
New York Nonprofit Helps Expand Internet Access
By Axel Turcios
By Axel Turcios
December 29, 2021
NYC MESH charges a flat up-front fee of $240 for equipment plus a $50 tip for the volunteer. Members are asked for a $20 monthly donation.

Daniel Heredia is a volunteer for NYC MESH, which is a nonprofit organization that provides affordable wifi access to low-income communities in New York City.

"With the increased capacity to work from home, learning from home and etc., during the pandemic," Heredia said. "So NYC MESH hopes to be an alternative so people can have more reliable access in various parts of the city."

Scaling a roof is a typical task for Heredia.

Every step he takes he does with care — handling equipment with precision to allow another New Yorker to get access to high-speed internet.

"This is an example of one of the antennas we use in the mesh," Heredia said. "This will connect to a local neighborhood hub, which in turn has antennas that connect to our super nodes in New York City."

Christina Rousso is a new member who just got her router installed in her Brooklyn apartment.

"I decided to email them because my Spectrum bill had gone up $20 in the past year per month for like the same spotty service," she said.

So far, NYC MESH has provided internet to more than 4,000 New Yorkers.

Internet in the city runs from $50 to $110 a month for high-speed internet, which is a price that many can not afford.

"It's a much more affordable option for internet in New York," Rousso said. "And I also like it that it's something that can be offered to people at different income levels."

To fund their services, NYC MESH charges a flat up-front fee of $240 for equipment plus a $50 tip for the volunteer.

"For me, it's important, especially in this community networks, to try to pass on knowledge to more people," Heredia said. "You know, it's awesome that I can do it and a couple other people can do it. But the importance of being a community network is that we are neighbors and we can help each other."

The installation takes about two hours. Members are asked for a $20 monthly donation.

Heredia says most internet providers still use obsolete technology to distribute their services. That caused many people to experience connection issues at home during quarantine.

"NYC MESH serves to basically give an alternative using completely different technologies that are able to more deal with a lot more people working from home than the typical cable providers," Heredia said.

He became a volunteer after getting the services for himself.

To get to the rooftops, sometimes the volunteers even have to climb ladders. And most of the times there are long they have to carry heavy equipment up to the rooftops. Heredia tells me he does as many as four installations per week.

"Since I've been doing this since last year, October, you know, I feel like at this point I'm used to the risk and I know how to be safe on the roofs," Heredia said. "We're just doing this to help the community so it's important for me to do it."