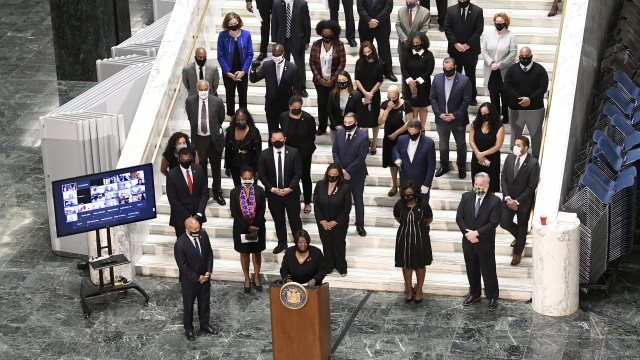 New York state has passed a package of bills to reform the way its police departments operate. Protests across the country and the even the around the world condemning police brutality in the wake of George Floyd's death have given the bills, some of which were proposed years ago, more momentum.

State Assemblywoman Tremaine Wright said, "We have taken this moment of loss and mourning, pain and frustration, angst and revolt and channeled our influence and power to transform the policing procedures of New York state."

One measure passed Wednesday calls for the creation of the Office of Special Investigation to "investigate and, when warranted, prosecute when a person dies in law enforcement custody or after an encounter with a police officer."

Another measure that was passed Tuesday repealed Section 50-A of the state's civil rights law, which protected law enforcement officers' disciplinary records. The public will now have access to misconduct complaints made against officers and transcripts and final dispositions of disciplinary proceedings.

Other measures call for all officers across the state to have body cameras, and for police officers to be required to provide medical and mental health attention to people in custody. What's more, an anti-chokehold act was passed, along with measures guaranteeing the right to record police activity and making it easier to sue people who make 911 calls based on someone's race, gender or religion.

New York Gov. Andrew Cuomo worked with legislators in the New York Senate and State Assembly last weekend on the police reform package. He's expected to sign all of the measures into law soon.