A Lawsuit Over The Trump Administration's Travel Ban Is Settled 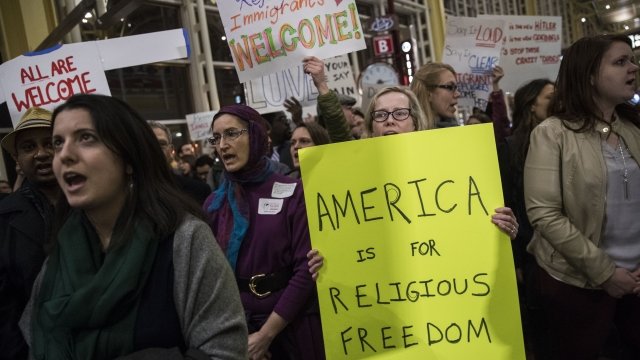 The lawsuit was filed on behalf of two Iraqi men who had valid visas but were detained at John F. Kennedy International Airport.

The lawsuit that spurred a nationwide stay on the Trump administration's first travel ban has been settled.

The suit was filed on behalf of two Iraqi men who were detained at John F. Kennedy International Airport shortly after the ban went live in January. Both men had valid visas.

They were just two of a number of people who were detained or denied entry into the U.S. as part of the initial order, which a judge in New York imposed a nationwide stay on.

As part of the settlement, the federal government will send each person denied entry a letter that lists free legal services to reapply for a visa.

The Hajj: Why Millions Of Muslims Travel To Mecca Every Year

Muslims from around the world will converge in Mecca, Saudi Arabia, for one of the largest religious gatherings in the world.

Those affected by the ban won't be compensated for damages, and the government doesn't have to admit wrongdoing.

It's unclear exactly how many people the U.S. government will contact. The settlement says the government doesn't have to reissue visas to those denied entry, but it says it will work with them "in good faith."