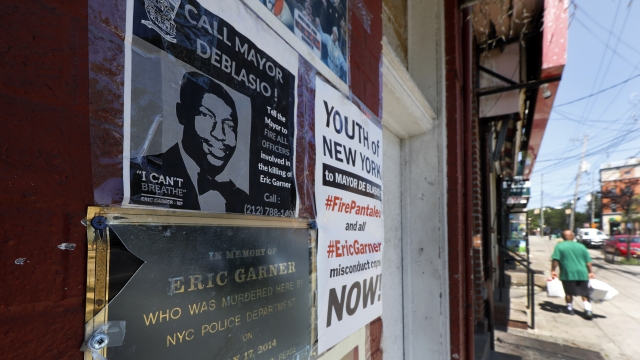 SMS
New York Lawmakers Pass Eric Garner Anti-Chokehold Act
By Johannah Grenaway
By Johannah Grenaway
June 9, 2020
Chokeholds within NYPD have been banned since 1993, but this bill would criminalize the restraint and make it punishable by up to 15 years in prison.
SHOW TRANSCRIPT

Eric Garner was a 44-year-old Black man who was killed in 2014 after a New York Police Department officer, Daniel Pantaleo, put Garner in a chokehold. In a video widely circulated on social media, Garner repeatedly exclaimed he could not breathe. The NYPD fired Pantaleo in 2019, but he was never criminally prosecuted.

On Monday, New York lawmakers passed the bill by a vote 140 to 3. Meanwhile, people across the country are outraged and grieving over the similar death of George Floyd, who also repeatedly said he could not breathe while being arrested by police. Garner's mother attended a memorial service for Floyd last week.

Assemblyman Walter T. Mosley said: "Almost six years ago, we heard Eric Garner tell police 'I can't breathe' as he was put into a chokehold by an NYPD officer. His words now speak from the grave as we deal with the police killing of George Floyd under nearly identical circumstances."

Chokeholds within NYPD have been officially banned for nearly two decades. But passing the Eric Garner Anti-Chokehold Act would ensure a police officer is charged with a class C felony if they injure or kill someone through "a chokehold or similar restraint." Officers could face a maximum prison sentence of 15 years.

The State Assembly says since Garner's death, the NYPD has used a chokehold restraint 996 times.

New York State Assembly Speaker Carl Heastie said, "The NYPD ban on chokeholds was not enough to protect Eric Garner, and it is not enough today. This legislation will put an end to the practice across the state."