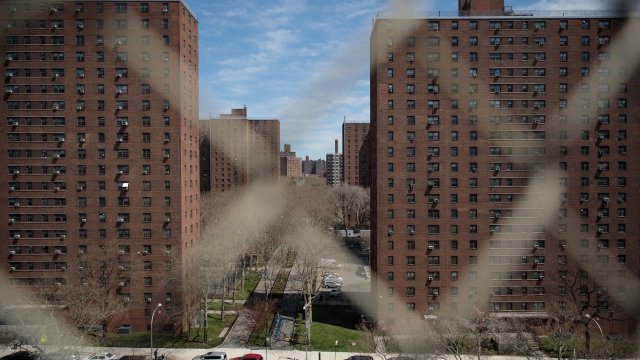 SMS
New York City Housing Authority Accused Of Endangering Residents
By Gabrielle Ware
By Gabrielle Ware
June 11, 2018
Between 2010 and 2016, at least 19 kids were found to have lead poisoning after being exposed to lead paint in NYCHA homes.
SHOW TRANSCRIPT

Misconduct by the New York City Housing Authority, or NYCHA, left its residents in dangerously unsanitary conditions and potentially poisoned multiple children, according to a federal complaint released Monday.

The 80-page complaint claims NYCHA, the largest authority in the country, actively covered up its abuses for years. It says the housing authority falsely reported its lead paint certifications and that between 2010 and 2016, at least 19 children were poisoned after being exposed to lead paint in NYCHA homes. And it says that number could ac tually be much higher.

The complaint outlines multiple attempts to mislead inspectors. Those include turning off water in buildings to hide leaks, stuffing holes in the wall with newspaper and cork and then painting over them, and covering broken doors with plywood and paint rather than fixing them.

New York City has agreed to set aside $2.2 billion over the next 10 years for improvements. NYCHA will also get new management.

New York City Mayor Bill de Blasio said Monday: "This morning I entered our city government into a contract with the United States attorney that will aggressively address the infrastructure and accountability failures outlined in the consent decree."

That contract still has to be approved by a judge. NYCHA managers may face criminal charges.