New York Has A Vampire Problem ... 'Vampire Fish,' That Is 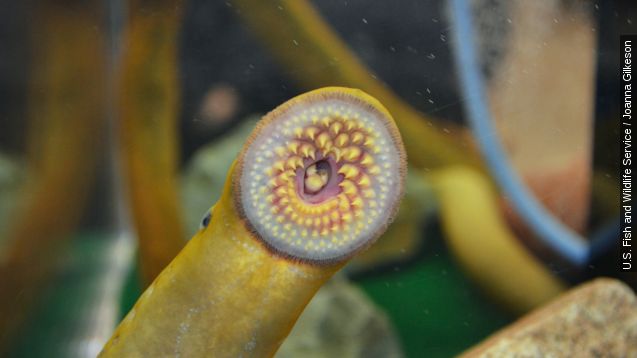 SMS
New York Has A Vampire Problem ... 'Vampire Fish,' That Is
By Jake Godin
By Jake Godin
May 20, 2015
Lampreys, also called vampire fish, are killing a lot of aquatic wildlife in New York creeks, so environmental agencies are trying to control them.
SHOW TRANSCRIPT

A New York creek has a vampire problem.

"Ooooo look! A ghost cup!" (Video via Unison Films / "What We Do In The Shadows")

"They're a couple feet long, very, very different. They are fish, no connection to eels, though they do look similar," reported WKBW's Matt Bové.

They're called sea lampreys, though it's easy to see why some folks refer to them as vampire fish. They've been around for hundreds of millions of years, though their presence in waters near the Great Lakes is a little more recent. (Video via U.S. Fish and Wildlife Service)

And they've apparently become a problem for the fish in Western New York's Cayuga Creek. Our partners at WKBW have more.

"They latch onto other fish. They then suck the blood of other fish. And get this: In their adult lifetime, which is about 18 months long, they take down — alone — about 40 to 60 pounds of fish," reported WKBW's Matt Bové.

To control the lampreys, WKBW reports members of the Department of Fisheries and Oceans Canada will apply lampricides — chemicals that specifically target lampreys' ability to reproduce —  to area creeks later this week.

The vampire fish problem isn't unique to New York's Cayuga Creek, either. Michigan's Traverse City treats its own creeks to control lamprey populations as well. The invasive fish can be found in all five Great Lakes.

And for anyone worried about taking a dip in waters full of lampreys, worry not: They don't bite humans.

This video includes images from the U.S. Fish and Wildlife Service and music from Kevin MacLeod / CC BY 3.0.