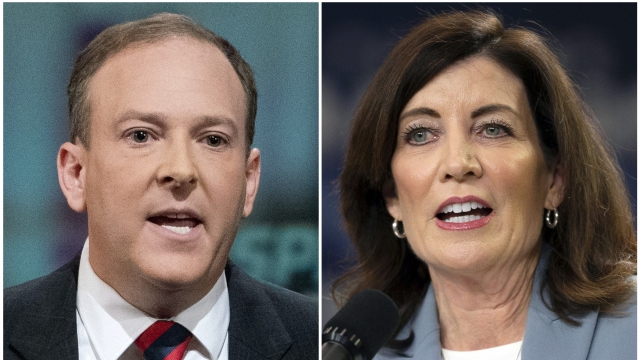 Democrats are getting nervous about the New York governor’s race, which could go Republican for the first time in a quarter century.

Polls are showing dark blue New York is turning shades of purple as election day approaches. And where time is the most precious commodity a week until election day, the biggest indicator of a close race is star power on the trail.

"I just sense that it's closer than everybody thinks. You're the governor, and you have $50 million in a state where you far outnumber Republicans. By far. How do you say you're the underdog? So you know, this is not a typical Democratic race in New York state," he said.

The candidates sparred over the weekend in their only debate, as polls continue to tighten. A recent survey by Emerson College has the governor sitting at 50% and the congressman at 44% with 4% undecided. These numbers are in sharp contrast to the previous three election results, where the Democrats won by double digits. The Cook Political report still calls this race a likely Democratic win.

"If we win, it's going to be marginal. If we lose, whatever we lose, it will be marginal," said Heidi Seick, the founder of Vote ProChoice.

Crime and abortion lead the discussion, as those issues top voter concern in New York. While murder rates are down since last year, other serious crimes including robbery, assault and burglary are up.

"There is no crime fighting plan if it doesn't include guns, illegal guns. You didn't even show up for votes in Washington when a group of bipartisan members voted for an assault weapons ban," said Hochul.

"Kathy Hochul believes the only crimes that are being committed are these crimes with guns. The people afraid of being pushed in front of oncoming subway cars, they're being stabbed, beaten to death on the street with hammers," said Zeldin.

"If I'm Lee Zeldin, the only thing I talked about is crime. And that's what's happened. And he is and he has done that. And I think that's why it's a close race," said Doherty.

The Hochul campaign, like many Democratic teams, is looking to harness anger over the Supreme Court's June decision to overturn Roe.

"You have to judge a person by his actions, all of his actions are voting against reproductive freedom, people's right to choose, and it is no, there is no indication that that should change," said Seick.

A win would be monumental for Zeldin in a state where just one Republican has served as governor since 1975.

"You don't get these chances a lot. I mean, you just have to look at the math of the state of New York. It's got to be a perfect race, because you go into it with with so many more registered Democrats," said Doherty.

His biggest competition might not be Hochul – but the R next to his name. Former President Trump lost by 23 points and Zeldin, as one of his biggest supporters, voted to overturn the election. While he's refused to denounce Trump, he wouldn't say whether he'd support his re-election. It's clear how fine of a line he knows he's walking.