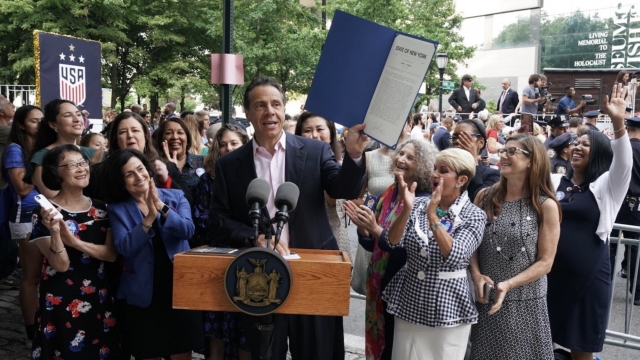 The new legislation will expand on previous equal pay laws in the state to make them apply to both public and private jobs.

According to the governor's website, the legislation builds on two executive orders already in place in the state. One of them makes it illegal for state entities to ask prospective employees about their salary history, while the other requires state contractors to disclose data on employees' gender, race and ethnicity. The new legislation expands those requirements to all employers who do business in New York, both public and private. Cuomo said it also eliminates a loophole that allowed for employers to get away with gender-pay discrimination. He said employers could defend paying someone less for doing basically the same work as someone else by saying the work wasn't "equal" but "similar." The new law now changes the language to say "comparable work."

The new law will take effect in 90 days.

This comes on the heels of Sen. Joe Manchin introducing a bill to block federal funding for the 2026 World Cup until the U.S. women's team is paid the same as the men's. Earlier this year, all 28 players of the women's team filed a gender discrimination suit against the U.S. Soccer Federation. They said that despite them performing "the same job responsibilities" as the men's team, playing more games and bringing in more revenue, they still get paid less and are denied the same playing, training and travel conditions as men.

According to the Bureau of Labor Statistics, women earned a little less than 80% as much as white men, overall, in the same areas of work in 2018.