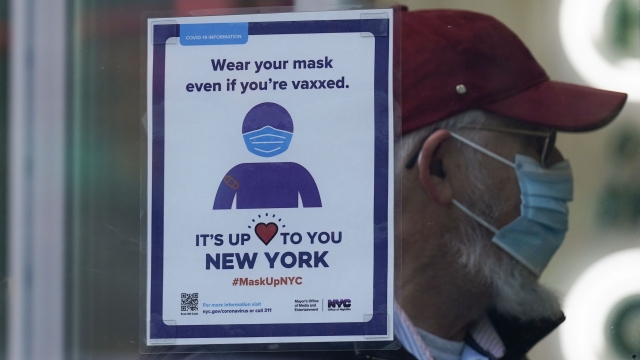 The mandate, put in place in mid-December, is set to expire Thursday unless the Democrat's administration extends it. Hochul has been hinting for several days that she would let the mandate lapse as the state emerges from a deadly wave of cases, fueled by the Omicron variant.

It isn't clear, though, when the state might ease other masking mandates, like the one requiring face coverings in all schools.

Hochul said this week that she would like to see vaccination rates for children improve before she does away with that statewide mandate, which has been in place since August.

The governor planned a morning news conference to announce which rules will stay in place.

New York's broader masking rule was put in place as Omicron cases began to soar. It was initially set to expire weeks ago, but had been extended twice while state officials waited for the wave to subside.

There is an exception for people who can't medically tolerate a face covering or mask. Public places that required vaccination as a condition of entry were also exempt.

Hochul met Tuesday with school administrators and teachers unions to talk about when and how the state might ease the school masking mandate.

New York state Department of Health spokesperson Jill Montag said Monday that regulation is "expected to be renewed" for now.