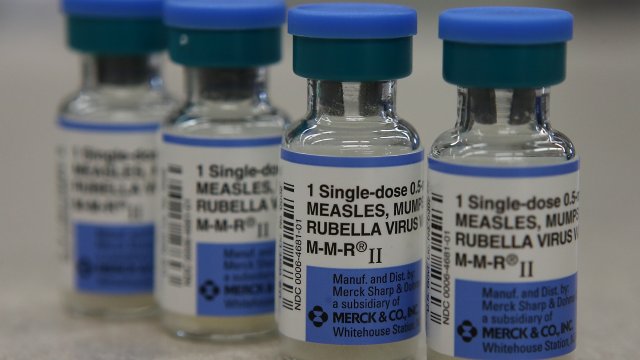 SMS
NY County Bans Unvaccinated Kids From Public Due To Measles Outbreak
By Cristina Mutchler
By Cristina Mutchler
March 27, 2019
Rockland County officials say the move is an attempt to curb what they call the longest measles outbreak since the disease was eliminated in 2000.
SHOW TRANSCRIPT

"We have now the worst outbreak in the nation. The time has come to do something," said Rockland County Executive Ed Day.

It's an effort by local leaders to let the community know it's serious about containing the outbreak, which has had more than 150 confirmed measles cases since October.

But how will the ban actually be enforced?

"There will not be law enforcement or deputy sheriffs asking for your vaccination records. That is ridiculous," Day said. "To repeat, that is not nor will ever be the focus of this effort. However, if you are found to be violation of this declaration your case will be referred to the District Attorney's office."

Parents who don't comply could be charged with a misdemeanor, which is punishable by up to six months in jail.

There is an exception: any minors who are unable to be vaccinated for confirmed and documented medical reasons are excluded.

It's not the first time Rockland County has taken this kind of step to curb measles contamination. Last year, an executive order prohibited unvaccinated kids from attending local schools, which resulted in a lawsuit from a group of parents.

According to the CDC, there've been more than 300 confirmed measles cases in 15 states so far this year. The agency attributes recent outbreaks to travelers who've brought the virus into the U.S. from other countries, like Israel and Ukraine.

Measles is a respiratory illness that's highly contagious – and also vaccine-preventable. Health regulators recommend children be fully immunized against 14 preventable diseases by the time they're six years old. That includes the measles, mumps and rubella, or MMR vaccine.

Rockland County officials say the 26-week-long outbreak is the longest in the country since measles was eliminated in 2000. The order will remain in effect for the next 30 days.