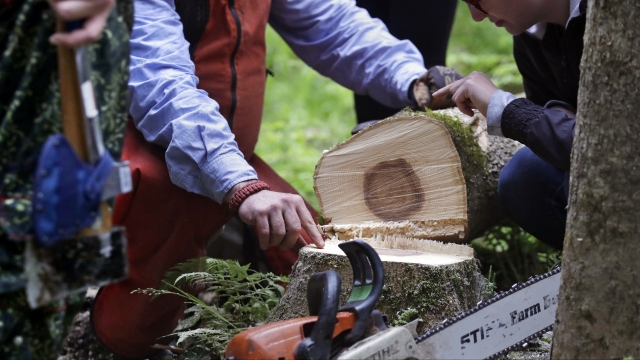 Timber samples are giving scientists a look into climate conditions a tree has experienced in its lifetime.

Underneath the concrete and steel of New York City is a forest of wooden beams and frames scientists say is packed with centuries of climate data.

Caroline Leland is part of a team of scientists with the Tree Ring Laboratory at Columbia University's Lamont-Doherty Earth Observatory. They're working to collect samples of the old growth timbers holding up the city. Her team includes Mukund Palat Rao, Milagros Rodriguez-Caton, Ed Cook, Alan Solomon.

"It's a lot of historical information, and that no longer exists on the landscape, but it's buried within these buildings," Leland said. "These samples hold an incredible amount of scientific value for understanding the climate of the past."

Visiting old buildings and demolition sites, the team has managed to collect timber samples from roughly 20 locations around the city, including the 19th century Terminal Warehouse in the Chelsea neighborhood of Manhattan.

"They had some old joists, structural pieces, that were being stored in the basement from the original structure," Leland said. "We were able to take a chainsaw and actually cut off small slivers of the timbers to sand and to look at the tree rings."

For Leland, tree rings serve as a bar code that records the growth of the tree before it was cut down.

Illegal Logging Is Rampant. Can IKEA Help Slow It Down?

IKEA and other major furniture retailers get much of their wood from forests crucial for biodiversity, stripping land of trees faster than is healthy.

It also shows the climate conditions the tree experienced before it became lumber.

"During a wet year, a tree will produce a large ring; during a dry year, a tree will produce a small ring," Leland said. "This allows us to reconstruct precipitation or soil moisture variability back in time, going back hundreds of years, and the same can be done for temperature. What we see with anthropogenic climate change is that there are a lot of extreme changes happening in climate."

In the case of the Terminal Warehouse sample, the timber was identified as longleaf pine that was cut down in roughly 1891, the same year construction began on the building.

"From the late 1800s to early 1900s, much of the longleaf forests were cut down, so I think less than 10% of the original longleaf forests that originally existed still exist today because of massive deforestation," Leland said.

Leland says the samples they collect tend to be quite small, especially if the wood is still in use. Many of these samples are stored back at the Tree Ring lab with specimens samples collected from other field expeditions.

Over the years, scientists at the lab have managed to collect samples from thousands of trees across the planet. Many of these samples have come from trees that are hundreds of years old.

Blazes have charred 5.6 million acres so far in the U.S. this year, putting 2022 on track to match or exceed the record-setting 2015 fire season.

"In a way, it does feel a little bit like Indiana Jones," Leland said. "It's very exciting for us to go on these mystery trips and to learn more about the history of these timbers."

Interpreting the data from these tree rings takes a special skill.

"I like to describe looking at the tree rings as kind of like reading an ancient text," Leland said. "It's not easy to do. It takes patience to be able to interpret the rings."

The lab hopes to collect more samples in the years to come.

"These trees, these samples, they have so many stories that we still need to explore and are going to be so valuable for understanding the changes that we've seen over the last century or more," Leland said.

By looking into the past, scientists hope to get a glimpse into the future.