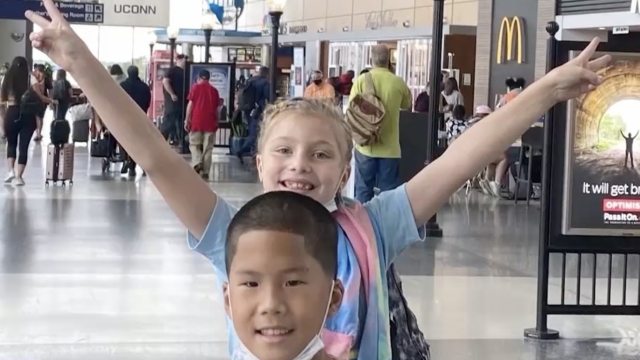 NEWSY'S AXEL TURCIOS: Why are you excited?

JUSTINE RAMOS: because I get to meet new people. I'm moving to a new grade.

Despite their young ages, behind their smiles they've had traumatic lives.

The children's foster care mother, Luisa Contreras, said Justine and Keyong were removed from their homes and placed in the foster care system at very young ages.

Justine has lived in eight different homes and Keyong has been in foster care since he was a baby.

Erika Palmer is the supervising attorney at Advocates For Children.

"There's probably hundreds of students like that who are in similar circumstances," said Palmer.

The Office of Elementary and Secondary Education said nationwide there are over 270,0000 students in foster care.

Recent data from New York City's mayor's office shows 43% of public-school students in foster care complete high school graduation on time, compared to 81% of their peers outside the system.

"They're also much more likely to struggle with mental health challenges because of all the trauma that they've experienced. And all of those things compound and make it difficult for young people to complete their education," said Palmer.

For the first time in New York, the Department of Education is introducing a city-wide central office to support students in foster care.

It will fill nine newly created positions including six that will serve students in foster care and at least two supporting students and kids in temporary housing. The ninth position is yet to be named. It comes in response to relentless pleas from families, advocates, and local officials.

The findings in New York City also show that foster care students are much more likely to be suspended from school than other students.

Palmer said there's a misperception about these children being bad kids. She adds that their behavior is impacted by the instability in their lives.

"We see students that, you know, have had to change schools in may or they have to change schools right before the end of the semester and then don't earn credit for that semester, have to repeat all of their classes. They get very frustrated," said Palmer.

"By having a support office that supports their needs, those needs will be met," said Joseph.

She has relentlessly urged the school system to establish an office dedicated to supporting these students.

"It's important to have a point person that can guide them through this, through the system as they register, transportation support, mental health support, and working with agents, the agency that placed them in those schools to make sure that we're meeting the needs of the whole child," said Joseph.

A child may end up in the foster care system as a result of parent neglect, poverty and substance abuse by the parents.

"When school is about to start there are always issues. Sometimes it takes the school two to three weeks to assign them a bus. Right now, I only have her route, but the boy still doesn't have a bus assigned," said Contreras.

Councilwoman Joseph was a foster parent herself. She said her youngest foster care son wasn't able to take a school bus because no routes were available to his school. He was instead given a metro card.

Newsy has reached out to the Department of Education several times but have not received a response. 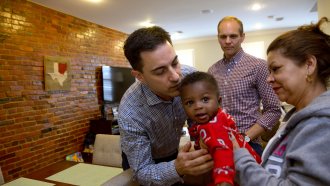 How Does The U.S. Adoption System Work?

TURCIOS: What's the greatest satisfaction there is left to you being a foster care mother? I imagine your children. But the experience.

RITA JOSEPH: I fell in love with these two boys the day I met them. And when I found out they wanted me to adopt them, it was — it was very emotional for me. So I am their mom forever. These they changed my life. I'm inspired by them. I fight even more on behalf of foster children because of them.

Meanwhile in the Bronx, Contreras tries everything in her power to make sure Justine and Keyong are happy. Both have been in her care for about a year.

"They call me mommy all the time. I try to give them the love they need," she said.

Contreras is finalizing the paperwork to adopt both kids — her children, as she calls them.

TURCIOS: Are you happy about that?

JUSTINE: I want to help the community.

TURCIOS: Why do you want to be a doctor?

KEYONG: To take care of mommy.