New York City Might Be Next To Relax Marijuana Rules 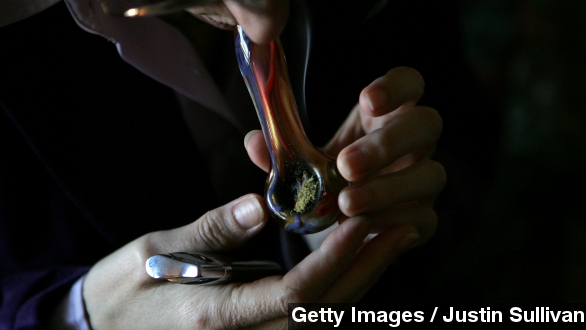 New York City could be next to loosen its grip on marijuana legislation, handing over a ticket instead of slapping on handcuffs if you're caught with pot.

WPIX: "The NYPD arrested 28,000 people for marijuana possession last year and is arresting at the same rate this year. It's a practice that has been decried by many."

According to the Times, more than 2,500 people have been arrested since July on misdemeanor marijuana possession, most of which included blacks or Hispanics. Referencing a study done by the Marijuana Arrest Research Project, it says, "In the first eight months of the year, blacks and Hispanics represented 86 percent of those arrested for marijuana possession in the city."

Reforming police practices made up a significant part of Mayor de Blasio's campaign, and he's been under pressure to deliver on those promises since his election last year.

After receiving a ticket under the possible change, the person would have to attend a court date, and — perhaps one of the most notable changes — the incident would not go on his or her record. However, if a person misses the court date, a warrant for his or her arrest would be issued. (Video via WNBC)

New York's WNYW notes officers have had a similar option since 1977 — they could choose to give tickets for lower-level pot offenses or make arrests.

"The data shows that more often than not, especially in neighborhoods that are mainly black and Hispanic, that they were choosing to make an arrest instead of giving a ticket."

But this proposal would throw the option of arrest out the window. Of course, there are still a number of unanswered questions. For instance, how many grams would be set for misdemeanor offenses, and would there be a difference in finding a baggie of pot versus an already-lit joint?

De Blasio is expected to meet with with the city's district attorneys this week.

This video includes images from Getty Images and Oregon Department of Transportation / CC BY 2.0.