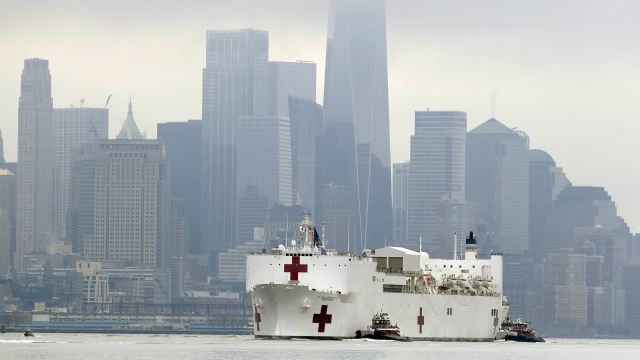 The USNS Comfort docked in New York City was reportedly only treating 20 patients as of Friday — not even close to its capacity. But in an interview with CNN, Mayor Bill de Blasio said he believes it will be full soon.

Even though the Comfort is only for patients without COVID-19, de Blasio said having it available is "an extraordinary morale boost." The ship was brought in to relieve some of the influx hospitals are facing because of the number of positive coronavirus cases in the state.

New York City has also set up a 68-bed makeshift hospital in Central Park specifically for people with the coronavirus. The Javits convention center has also been turned into a temporary hospital for coronavirus patients.

New York has more confirmed coronavirus cases and deaths than any other state. De Blasio said more ventilators and more doctors and nurses are needed on the front lines. He said he asked President Donald Trump and the military for 1,000 nurses, 150 doctors and 300 respiratory therapists over a week ago, but the government hasn't sent them.

"There's no effort so far, literally none, to mobilize doctors and nurses from around the nation and get them to New York and other places that need them," de Blasio said. "I've called for a national enlistment of all medical personnel who can free up from their day-to-day jobs and go to the front, and the only way that's going to happen is if the military organizes it."

He said New York City will start to run out of ventilators, which are needed to keep some critically ill COVID-19 patients alive, on Sunday.

"But I don't know after Sunday if we're going to have what we need," he said. "And that's just the ventilators."

He added, "We can only get to Monday or Tuesday at this point. We don't know after that. How on Earth is this happening in the greatest nation in the world, and how are our military at their bases?"