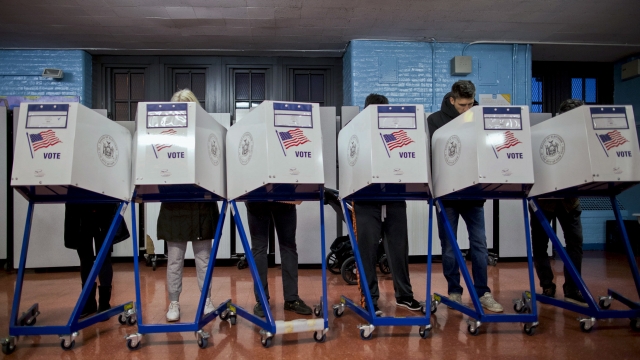 SMS
New York Cancels Its Presidential Primary Election
By Johannah Grenaway
By Johannah Grenaway
April 27, 2020
New York's State Board of Elections commissioner said he was worried about voters and poll workers deciding between their democratic duty and health.
SHOW TRANSCRIPT

The commissioner of the New York State Board of Elections said he was worried that voters and poll workers would have to decide between their democratic duty and their health. A Democratic chairman on the board said Sen. Bernie Sanders' supporters wanted "essentially a beauty contest" to cast ballots for Sanders even though he's ended his presidential campaign.

David Hawkings, editor-in-chief of The Fulcrum, says New York gets a lot of national attention anyway, but even more so since becoming the epicenter of the U.S. COVID-19 outbreak. He said other states will look to see how Gov. Andrew Cuomo chooses to conduct elections while the state is fighting the virus.

"Progressives, liberal progressives, are not happy with Cuomo and New York to begin with. This will not make them any happier. But on the other hand, voting rights advocates and good government groups around the country are encouraging the kind of steps that New York is taking."

New York, Kentucky and Maryland have recently scaled up voting by mail in an effort to protect public health. Thousands of voters in Wisconsin requested absentee ballots due to the the coronavirus, but many ended up having to vote in-person anyway because their ballots didn't arrive in time. Ohio could see a similar predicament Tuesday.

"Nothing has galvanized the world of democracy reform in my time doing this than this year and how to get a fair and healthy election. We need to give voters more easy access to the polls. On one hand, it has great potential, but on the other hand, if we try it and it end up making people more angry and frustrated than it helps, it might be a setback."

Congressional and state-level primaries in New York will still take place on June 23. Gov. Cuomo signed an executive order to let residents vote by absentee ballot due to the risk of acquiring COVID-19.