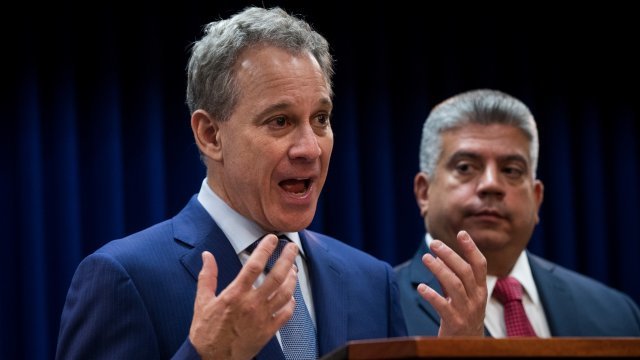 SMS
New York AG Wants State To Prosecute Despite Presidential Pardons
By Gabrielle Ware
By Gabrielle Ware
April 18, 2018
New York Attorney General Eric Schneiderman is trying to amend state law to allow prosecution regardless of whether someone has received a pardon.
SHOW TRANSCRIPT

New York Attorney General Eric Schneiderman wants his state to have the power to criminally charge people, even if they've been granted a presidential pardon.

Schneiderman said in a statement Wednesday: "We are disturbed by reports that the president is considering pardons of individuals who may have committed serious federal financial, tax, and other crimes — acts that may also violate New York law."

In a letter to Gov. Andrew Cuomo and other lawmakers he wrote that historically, pardons have been used sparingly and with caution, but "recent reports indicate that the President may be considering issuing pardons that may impede criminal investigations."

If the requested amendment to New York law is approved, any pardoned Trump aides could still face legal action outside of special counsel Robert Mueller's investigation.