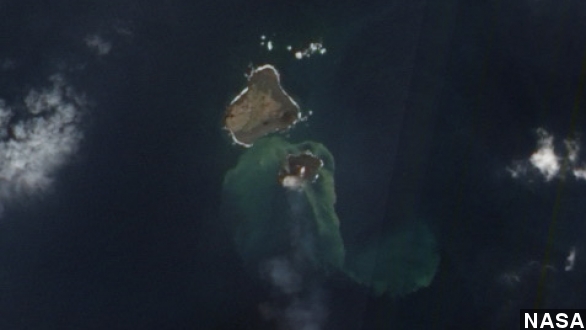 This is no way to treat your neighbor. Images from space now show an island in a remote part of the Pacific Ocean has swallowed a nearby island whole.

The new island, called Niijima, formed as a result of an eruption from a sea-floor volcano last November pushing lava and ocean rocks to the surface, and the island grew three times its size in about a month. (Via ITN)

Satellite images show the resulting magma outpour was enough to recently merge the two islands, which are located about 600 miles south of Toyko — right on the edge of the Pacific's "Ring of Fire." (Via The Asahi Shimbun)

NASA officials say together the two islands now measure more than 3,000 feet across. The underwater volcano is still erupting, but currently the new landmass rises nearly 200 feet above sea level.

According to CNN, Japanese scientists expected this new island to last several years before eroding and slipping back into the ocean, but now its continued growth means it could remain above sea level a lot longer.

LiveScience reports the older island was formed when it last erupted in 1974. Now that it's conjoined with the new island, on which lava is still flowing, the island could continue to grow in size.

Niijima's volcano is reportedly the most powerful one in the area. Similar islands have formed in the past but have since eroded and disappeared.