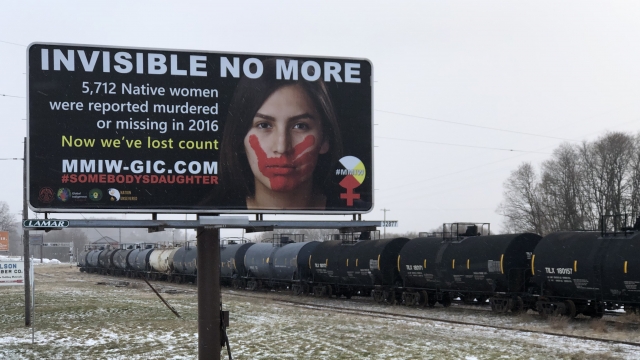 Nearly 6,000 native women were reported murdered or missing in 2016 alone. A number so alarming billboards began popping up Michigan and Minnesota to raise awareness to what coalition groups are calling an ongoing genocide.

"I have a daughter... I wouldn’t want that to happen to her,” Andrea Lynn Roque told Newsy.

Roque is a Grand River Band of Ottawa Indian and a mother of three. Bella, her oldest, is seventeen.

For more than two decades the 36-year-old has lived with an overwhelming fear her only daughter could be abducted at any moment – because, she says, that’s what happened to her.

“When I was a teenager I grew up on in grand rapids on a busy street, and we had a corner store and I was walking to the corner store and there was a vehicle that pulled up to a driver and someone grabbed me and pulled me in,” Roque said.

But Roque escaped, ran to a corner store and hid in a back room. She says the clerk chased one of her kidnappers away.

Andrea is actually one of the lucky ones. She survived. Statistics show four in five American Indian and Alaska Native women have experienced violence. More than half have lived through sexual violence.

In August, the Native Justice Coalition launched this billboard campaign in the Great Lakes region. And there’s new action in Washington from members of Congress like Rep. Deb Haaland.

“The issue of missing and murdered indigenous women has been happening since colonization started in the late 1400s. So it's, it's a very deep seated issue. It's not something that's just you know, happened in the last couple decades,” Rep. Haaland said.

Haaland has introduced numerous bills including the “Not Invisible Act,” which creates a committee of law enforcement, tribal leaders, and victims’ advocates to advise congress on potential solutions.

“Communication is a definite issue when it comes to these when it comes to violence against native women and missing and murdered indigenous women. We need to look at, you know, we need to give people the ability to be connected with law enforcement if we expect them to be able to contact them and have them respond when they're in danger,” Haaland said.

In November, President Trump and Attorney General William Barr launched a task force similar to the “Not Invisible Act” called the Missing and Murdered Indigenous Persons Initiative, or M.M.I.P.

Newsy asked Haaland if the White House or the DOJ reached out to her to get advice, considering she launched a lot of new legislation and amendments to combat or tackle this issue. “No, we didn't hear from them at all,” Haaland said.

Newsy then asked her what she would have suggested. She responded: "It's not something you can just think of and go out and do it. It's a lot of meeting and talking and getting feedback from the folks whose lives have been affected by this really terrible issue.”

The National Congress of American Indians reports there are more than 500 federally recognized tribes. The Justice Department says Barr met with two before announcing the initiative. The $1.5 million initiative places coordinators in attorney’s offices across 11 states, including Michigan, to develop protocols for law enforcement’s response to missing cases, provides and coordinate FBI assistance with tribal leaders and improves data analysis.

"I think it’s very necessary that there’s a focus on it at the federal level." said Levi Rickert, the publisher of a Native American news website. He applauds the effort, but says it’s not enough.

“i think one of the problems is as Native Americans we aren’t taken seriously in terms of who we are as a people. And a lot of times the women are accused of being runaways or becoming prostitutes and so there has been a real de-emphasis of who we are as native people,” Rickert said.

A feeling 15-year-old Andrea Roque says she felt after being questioned by police.

“I gave him all my information, and then they just right away started saying 'well, you can tell us you're, you're making this up, right? You know, we wanted attention' and it was like, no,” she explained.

21 years later, Andrea says she and her family never heard from investigators. Newsy asked the Grand River Police if it had any records of Andrea’s complaint. They could not find any.