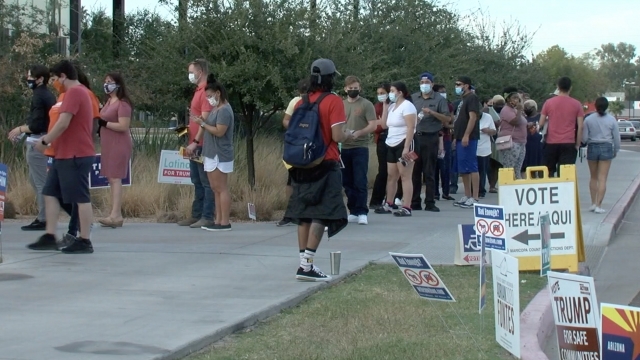 Since the start of this year, state legislators around the country have introduced more than 2,000 bills to change local election laws, potentially impacting voter registration, election administration control, ballot harvesting and more.

According to the Voting Rights Lab, only 188 of those bills have become law, and some of them do expand access to the ballot box. But voting rights advocates and Democrats in Congress are very worried about the impact of some of the country's most restrictive new laws.

"Well, we need to act very quickly to defend the rights of Americans to vote in every level. And we also need to defend the integrity of the electoral process, so that we don't get partisan manipulation of voting processes and election results," said Rep. Jamie Raskin of Maryland.

Some of the most controversial changes have come from Florida, Georgia and Iowa. All three states passed wide-ranging new laws impacting absentee ballots, early voting, drop boxes and more. Democrats argue the new rules restrict voting access, and have filed lawsuits to block them. Other Republican-controlled states, like Texas, are pushing similar laws.

But dozens of states have also expanded voting access. For example, Nevada will now automatically send all registered voters a mail-in ballot, unless they opt out. New York and Washington state will allow parolees to vote. And in Kentucky, the Republican legislature and Democratic governor worked together to change their state's election laws.

"It would be nice to know what magic made Kentucky a place where compromise was possible, where it does not seem possible and just about any other state," said Barry Burden, a professor of political science and the director of the Elections Research Center at the University of Wisconsin - Madison.

Kentucky's new law adds three days of in-person early voting, allows counties to use vote centers and drop boxes, and it requires election officials to offer online tracking for absentee ballots. As a typically conservative state, the strength of the GOP there likely contributed to lawmakers' willingness to compromise.

"It's a little easier to do politically in Kentucky because it's not a state where Democrats are competitive. It's a very Republican state. So I don't think the Republican Party fears that changes made there are going to up end their political fortunes," said Burden.

All these state changes could be changed again if Democrats in Congress successfully pass the For The People Act, their sweeping election reform bill. The bill already passed the House, but faces an uphill battle in the Senate as long as the chamber's filibuster rule remains unchanged.