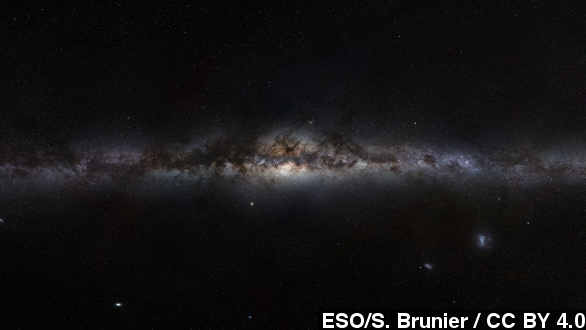 The search for habitable planets may have just taken a big step forward. (Video via NASA)

New research indicates most stars in the Milky Way have between one and three planets in the so-called habitable zone. (Video via NASA)

That's the range of distances from the star where it is cold enough that water doesn't evaporate but not so cold that it freezes — also known as the Goldilocks zone.

It's a hard number to guess, but scientists estimate there are hundreds of billions of stars in the galaxy. So if each one has a couple planets in the habitable zone, that greatly ups our chances of finding life or a place we can live.

But so far, NASA's Kepler Mission, which uses a space observatory to look for planets, has turned up a relatively small number of planets in the habitable zone.

The problem, the scientists argue, is our perspective is limited. Because of different orbital sequences, or the axes of different planets, we can't necessarily see all or even most of the exoplanets out there.

So to figure out just how many of those planets we might be missing out on, the researchers turned to some very old math.

Specifically something called the Titius-Bode law, thought up by these two guys named Johann, back in the 18th century.

That law used some pretty complicated math, based on the spacing between planets, to correctly predict the location of Uranus and the dwarf planet Ceres. (Video via NASA)

While the law failed to correctly predict Neptune's location, it can be used to establish where planets might be missing in a system. (Video via National Geographic)

The researchers have identified some priority planets for Kepler to look for that could help confirm their theory.

This video includes an image from ESO/S. Brunier / CC BY 4.0.