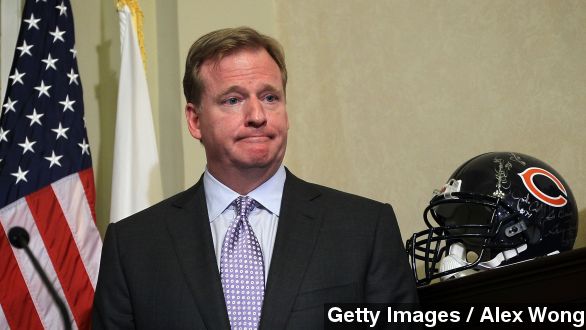 When the Associated Press broke the news Wednesday afternoon that law enforcement officials did send a copy of the now-infamous Ray Rice elevator tape to an NFL executive back in April, the reaction from the sports media world was a vigorous one.

The league had previously denied any officials having seen the tape. NFL Commissioner Roger Goodell told the owners in a memo they had not seen it until it was publicly released by TMZ on Monday.

Goodell even spoke with CBS in an exclusive interview to reaffirm that Tuesday.

“I specifically asked the commissioner ‘did anyone in the NFL see this tape before Monday?’ He said no.”

Rice was originally suspended two games by Goodell and the NFL. After TMZ released the video, Rice was cut by the Baltimore Ravens and suspended indefinitely by the league the same day.

RAVENS HEAD COACH JOHN HARBAUGH VIA FOX NEWS: "It was something we saw for the first time today, all of us. It changed things, of course. It made things a little bit different."

Several media outlets across the Internet brought that into question though, wondering if the NFL was lying about seeing the video.

A league statement released Monday said "We requested from law enforcement any and all information about the incident, including the video from inside the elevator. That video was not made available to us."

The NFL released another statement Wednesday repeating its stance that no one had seen the tape until Monday, saying: “We have no knowledge of this.”

Multiple entities responded on Twitter, with ESPN’s Keith Olbermann and others comparing Goodell to Richard Nixon.

ESPN’s Trey Wingo quoted Goodell from 2012 during the Saints bounty scandal as saying “ignorance is not an excuse.”