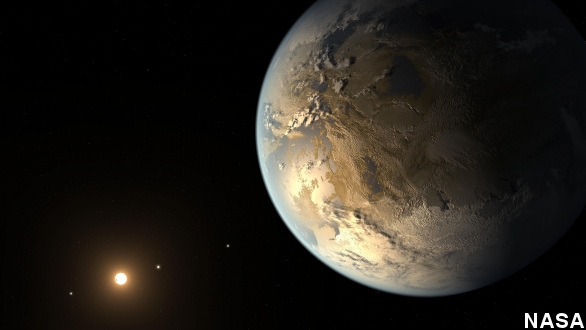 By Steven Sparkman
April 17, 2014
The newly-discovered planet is roughly the size of Earth and could have liquid water on its surface.
SHOW TRANSCRIPT

We've been hearing a lot about Earth-like planets out there in our galaxy, but a new planet announced Thursday might be the earthiest one yet.

NASA's Kepler telescope uncovered this planet, dubbed Kepler-186f. It's similar to Earth in two important ways: its size and its chance of having liquid water.

If you keep up on exoplanet stories, they might all start to blur together after a while, so here's a quick primer on why this might be a big find.

Over the past few decades, around 1800 planets outside our solar system have been discovered, but it wasn't until 2010 when the first rocky planet was found in its star's "Goldilocks zone," that is, the area where it's not too hot or too cold for liquid water. (Via European Southern Observatory, NASA)

Then, in 2011, the first Earth-sized planets were found, but those weren't in the Goldilocks zone. (Via NASA)

Those are two of the things astronomers are looking for in an Earth-twin: size and distance from the star. There are a few other criteria before a planet could be called a perfect match, though, like orbiting a similar star and having a similar atmosphere. (Via NASA)

Kepler-186f doesn't check all those boxes. It orbits a completely different kind of star than ours, for one thing. But it gets both the size and distance part right, so it's at least an Earth-cousin.

So the big question is: could life as we know it live there? The answer is nobody really knows. Slate's Phil Plait explains why.

"The next things we’d need to know about it are the mass, what its atmosphere is like, and the surface temperature. The gravity of the planet depends on its mass, and in many ways the atmosphere depends on the gravity. Unfortunately, we don’t know either."

A new generation of telescopes could help clear all this up when they come online in the coming decade. But a recurring message from scientists is that Kepler-186f shows it's just a matter of time before a true Earth twin is found.

A NASA astronomer involved with the study tells Science, "Our galaxy is probably littered with cousins of Kepler-186f." Pretty good odds.