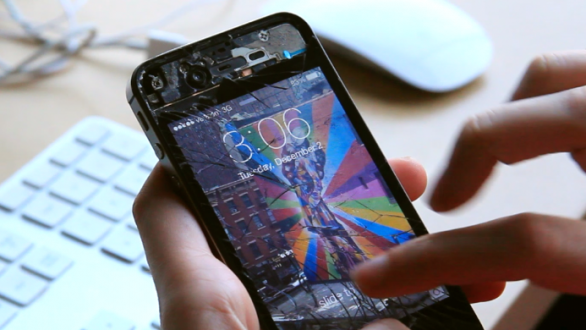 By Danny Matteson
December 2, 2014
The hypothetical iDevice enhancement would use “input from a combination of gyroscopes, accelerometers, and GPS” to reorient the device in free fall.
SHOW TRANSCRIPT

If you’re anything like us, you have a tough time keeping your phone’s screen crack-free. Ouch.

But, if you happen to own an iPhone, Apple might soon be giving you a hand — that is, if your phone were to slip out of your hand. (Video via Apple)

Which in layman’s terms translates roughly to: If you drop it, it will fall kind of like a cat. iPhones and cats in the same story, how do you like that, Internet? (Video via YouTube / SmarterEveryDay)

According to Gizmodo, the hypothetical iDevice enhancement would use “input from a combination of gyroscopes, accelerometers, and GPS” to reorient the device in free fall — protecting fragile components.

Which, according to National Geographic, isn’t too far off from how cats do it.

“Cats always right themselves in a precise order. The head rotates first, based on messages from the eye and inner ear. Then the spine twists and the rear-quarters align.”

But cat-like reflexes aren’t the only way Apple is working to protect your iPhone from you. According to The Telegraph, the patent also outlines plans for a battery that would eject itself during a fall — changing the direction the phone is falling in — and a contracting headphone jack that would turn your headphones into a sort of makeshift bungee cord.

The patent was actually filed back in March, and so far there’s no indication of when a more graceful iPhone could become a reality.

But it’s not exactly a new idea. As GeekWire reports, Amazon was awarded a patent for a smartphone airbag in December of 2012.

We don’t recall seeing that on the Amazon Fire phone. (Video via The Verge)