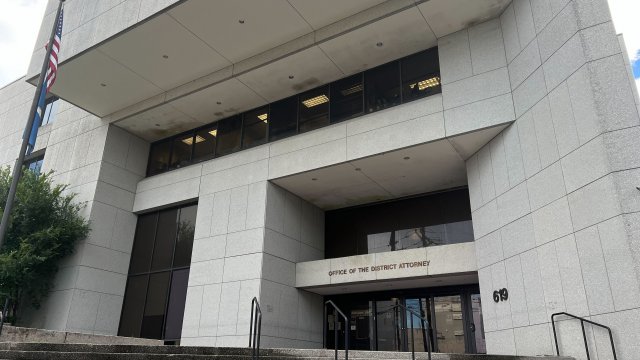 New Orleans is sometimes referred to as the city that care forgot.

Its meaning has faced much debate: is it the sweltering heat? The care-free feeling you get in the city, or the lack of a livable wage?

Those words hit home for Maurice Lewis. Thanks to the Orleans district attorney, Lewis now walks free after serving a 23-year sentence under one of the then harshest three strike rules.

"It feels good to be free. I just thank god, you know, that he made a way for me to put me back in society," Lewis said.

Lewis was locked up in one of the toughest prisons in the U.S. — Angola.

To end up here, many believe you had to do something bad. Be a real menace to society

That wasn't the case in the 1980 and 90s, according to New Orleans’ current district attorney Jason Williams.

"Maurice Lewis got a life sentence from this office in 1998 for stealing $20 from a purse, and that $20 had been returned to the victim within moments of it being taken," Williams said.

That was the last strike for Lewis, who was convicted under the so called three strike rule. His 2 other crimes were both non-violent.

"One of his predicates wasn't for murder or rape, it was for stealing of an umbrella over the porch while it was raining. Right. So, when you really look at how we were using the habitual offender law, it was not used to keep us safe. It was used to keep certain people down," Williams said.

The district attorney and his civil rights division are intent on reviewing the most drastic sentences and righting the wrongs of the past.

"Prosecutors had tough on crime policies, but we still were the murder capital of the country at those times," Williams said. "So, the idea that giving people maximum years in jail and life sentences for low level nonviolent crimes, the idea that that made us safer was proven not to be true."

Lewis is one of more than 80 people who had their sentenced reduced to fit the crimes that they committed.

"This is no longer a Jim Crow era office," Williams said. "And in doing so, I believe that we're building trust that has never existed in this community before."

Lewis says as a teenager, he felt the overwhelming duty to step up and support his family.

"I'm trying to do everything I can. I went out there trying to find that a job and work," Lewis said. "You don't want to hire me. What should I do? What's the next step?"

"This this young man never learned to read, dropped out of school, and the system didn't do anything to help him put those pieces together," Williams said of Lewis' case. "The system just got rid of him. And so, part of the work in creating a civil rights division, part of that work and that reasoning and rationale was to look back and confront the sins of the past."

MAURICE LEWIS: I should. I feel like I should. Have did some time cause I did wrong. You know, if I'm working for mine, I wouldn't want somebody to take something for me.

After what is known here in New Orleans as "The Division" gains their release, men like Lewis find help from pastor Tyrone Smith.. Smith co-founded The First 72, a program that helps men who were in prison get back on their feet.

"The 72, we came up with that because we know the first three days out of prison could be to make or break a guy," Smith said. "You think the crime rate is high right now? It would've been even higher because every guy that comes out and we are able to talk to him, counsel him, help him, we keep him from going back to prison, committing the crime."

Today, Lewis is trying to reacclimate to life outside of Angola. He's facing a lot of his old demons. He’s having a hard time looking for work. And he's contemplating leaving New Orleans.

"I really want to get away from New Orleans. I'm tired of New Orleans," he said. " If I go somewhere else, I figure I can do a lot better for myself."