Millennials Look To Shake Up The Status Quo In New Congress 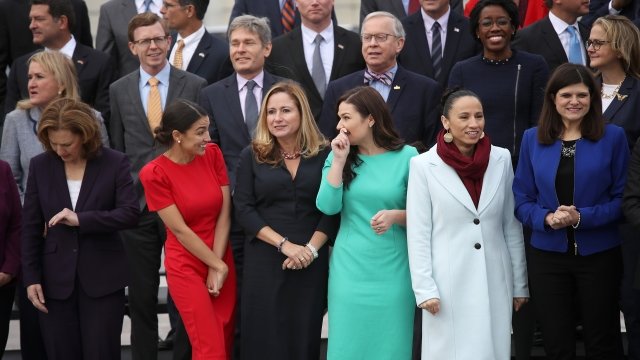 By Kellan Howell
December 31, 2018
A record-breaking number of millennials are joining the next Congress, and they've got big plans to shake up the status quo.
SHOW TRANSCRIPT

There’s a record-breaking number of millennials in the new Congress and they are hoping to radically change politics through bipartisanship.

"I think one of the misconceptions is that millennials are seeking ideological purity on the far left or the far right," said Steven Olikara, founder and president of the Millennial Action Project. "One of the reasons that happens is that members that get the most media attention are the ones who are often calling for that. But, the vast majority of millennials who ran in this cycle were talking about working across the aisle to get things done."

Twenty-six of the newly elected House members were born between 1981 and 1996, making them millennials. There were only six in the last Congress. And the average age of the incoming members of Congress is ten years younger than continuing members.

Olikara, who founded the nation’s largest bipartisan organization of millennial policy makers, says new, younger members have big plans to reform what they see as a dysfunctional political system, taking on issues like gerrymandering and dark money in politics.

"The one thing in their favor right now, is that the vast majority of the American people are sick and tired of the partisanship and they’re tired of a dysfunctional Congress. So I think, the biggest opportunity we have is an unprecedented movement to fix the system in a post-partisan way," he said.

When it comes to policy issues, millennials will be focused on finding long-term solutions on immigration, the national debt, and climate change.

But if millennial lawmakers want to change the status quo in Congress, they'll have to tread carefully. Major legislative changes can't happen without the support of more senior members in leadership roles. The median age for House members in the 116th Congress is 58.

"They really are stuck with this conundrum, how much do you rock the boat? How much do you support the current leadership? How much do we even toe the party line when, you know, the majority of the millennial generation doesn’t want to fit into these binary choices of Democrat versus Republican," Olikara said.