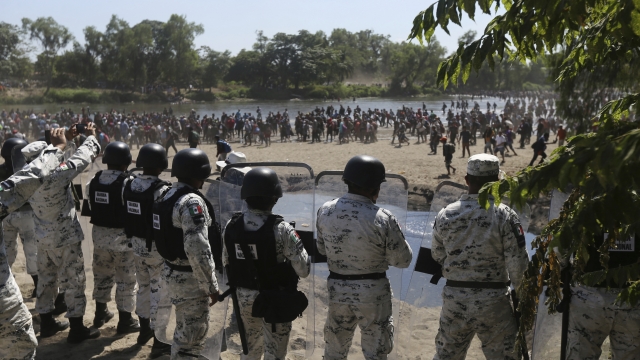 More than 4,000 migrants from Central America are trying to cross into Mexico, largely in hopes of reaching the United States, where President Donald Trump says they're not welcome.

This latest group, led by people trying to flee poverty and violence in Honduras, is stoking memories of large caravans President Trump railed against during the 2018 midterms and bitterly condemned as he threatened tariffs against Mexico last year.

The new outflow, with migration numbers on Monday appearing to have doubled since last week, is being met by hundreds of Mexican National Guard Troops mobilizing to deter the influx. Meanwhile, migrants, some praying for a safe journey, some clashing with security forces, appear determined to complete the journey.

"Okay. Good morning. My name is Carlos Fernando Reyes Flores. I'm from Tegucigalpa, Honduras. The point that I left my country was because there was no job. There's no work up there. There's too much violence. Too much criminal people. And we can't live up there. That's the only thing I can tell you."

This group is pushing forward despite the Trump Administration's requirement that people claiming fear of violence or persecution must first apply for asylum in other Central American countries they pass through.

The administration has additionally forced some 56,000 people with pending asylum hearings in the U.S. to wait in Mexico, often in squalid migrant camps. Their treatment there was condemned by Texas Rep. Joaquin Castro, part of a Congressional delegation visiting the border region.

"There are folks there who obviously don't have running water. There are young kids less than a year old, some of them two or three years old, who are living with their parents in squalor. There are times when the river overflows there or you get heavy rain and their encampment turns to mud. These are conditions that people seeking asylum and refuge in the United States should not have to endure.”

Mexico says migrants from Central America may apply for residency, social services and work visas, largely in the southern part of the country, where wages are low. The country's Interior Secretary says: "The government (of Mexico) is open to being a country of hospitality and refuge. To the migrants who want to remain here to work and to make use of our social programs, welcome. But for those who want Mexico only as a country of transit, we will not accept them.”