New Congressional Members Have A Lot To Deal With Before Legislating 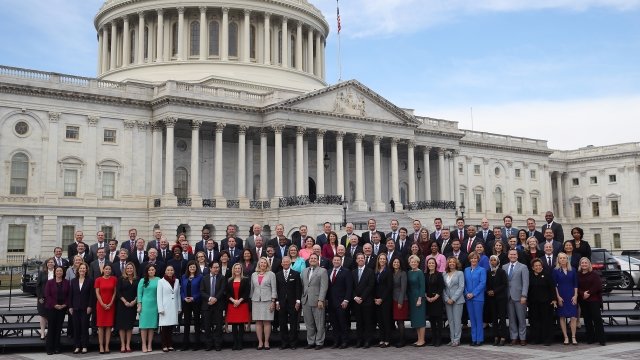 Transitioning to a new job can be stressful for anyone...especially if you're an incoming member of Congress.

Fitch is part of a foundation that helps freshmen members get started. He says it's like running a business with constituents as the customers and the boss.

And new members can often feel overwhelmed during the first months of the congressional session. Many work an average of 70 hours a week with little sleep while trying to adjust to the demands of their job.

"In our handbook on running a congressional office it's called 'Setting Course,' some of the things we ask members to do is first think strategically don't think tactically," Fitch said. "Think long term [and] ask yourself when that last editorial is written about you in the major paper in the state when you retire hopefully years from now, what are they going to write about?"

On top of that there's the personal cost of maintaining at least two households--One in Washington and the other in the place they represent. And shrinking or eliminated resources over the last several years have also made the transition a bit trickier for new members.

"They don't have the same level of infrastructure in the policy advisers that they had," Fitch said. "The Congressional Research Service has been shrunk, there used to be an office of technology assistance, OTA, and there's quite a few calls for that to be restored because members of congress have to make difficult decisions on the internet  and cybersecurity, things that are very complicated and very technical."

With the new Congress starting, Fitch anticipates there will be an extra bright spotlight on the incoming members, which is the most diverse class in history.

Every freshman class has a little bit of it's own character and this one definitely has a little bit more personality than most because it's such an exciting group of people," Fitch added. "I think that's also what's interesting about the diversity of this class is their professional experience is different.

We've got former CIA agents, we've got two football players, two NFL players coming in. It's been a fascinating learning experience for us here at the Congressional Management Foundation to read their bios. I was just reading one, the new freshman congreswoman from Connecticut Representative-elect Hayes who was a national teacher of the year," Fitch said.

"You know that's a little unusual so I think it is exciting, we enjoy getting to know them on a personal level and helping them out because they don't get a lot of assistance in this are they are often very surprised."