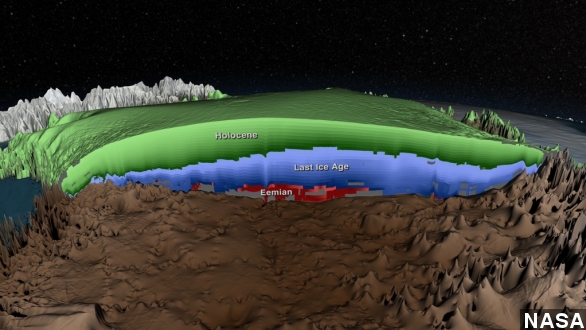 SMS
New Maps Show Off Greenland's Ice In Unprecedented Detail
By Evan Thomas
By Evan Thomas
January 23, 2015
The radar maps could help scientists understand Greenland's environment as it was 115,000 years ago and predict its behavior in the future.
SHOW TRANSCRIPT

Ice is not just frozen water. In Greenland, there are thousands of years of history locked up in layers of the stuff.

Thanks to new radar maps of Greenland’s ice sheet, scientists are getting their best picture yet of what the ice was like a long time ago.

The maps use data gathered in early 2014 by NASA’s annual Icebridge mission, which flew ice-penetrating radar over Greenland’s glaciers.

“Radar transmits electromagnetic pulses into the ice, and records the reflected signals, allowing us to track the depth of the layers detected in the ice.” (Video via NASA)

The technique has yielded the highest resolution maps yet of the various ice layers under the surface, which contain samples of dust and volcanic ash hundreds of thousands of years old.

The maps will give climate scientists a better idea of what Greenland’s ice load was like as far back as the Eemian period some 115,000 years ago. University of Texas glaciologist Joe MacGregor explains: (Video via NASA)

“Prior to this study, a good ice-sheet model was one that got its present thickness and surface speed right. Now, they’ll also be able to work on getting its history right, which is important because ice sheets have very long memories.”

The scientists say the data will also help them look to Greenland’s future.

One Ohio State team detailed a vicious cycle: underground lakes are filling with meltwater so quickly they weaken the surrounding ice and make it melt more easily.

The new ice sheet maps will help make future projections more accurate, so scientists will have a better idea of how and why the ice is melting.

The Texas team has published its findings in the Journal of Geophysical Research.