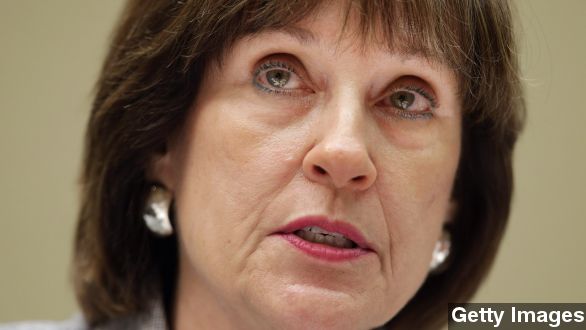 As if the GOP needed more reasons to wince at Lois Lerner's name — new emails from the former IRS director have been revealed and what she had to say about Republicans was less than flattering. (Via Getty Images)

In the exchanges, Lerner is talking to an unnamed person about conservative talk show hosts and their callers.

The anonymous person suggests that according to right wing radio shows, the U.S. is "through", to which Lerner replies "Great. Maybe we are through if there are that many ---holes."

The unnamed person then refers to the callers as "rabid" prompting Lerner to suggest that "we don't need to worry about alien teRrorists [sic]. It's our own crazies that will take us down."

To chair of the Committee of Ways and Means, Dave Camp, that was enough to prove Lerner's guilt writing in a letter to the Department of Justice that Lerner's "animus" towards conservatives drove her to specifically target Tea Party groups. (Via Getty Images)

"While the Committee has not seen any evidence of a serious investigation by your Department, it is my sincere hope that in light of this new, strong evidence that you immediately begin aggressively investigating this matter."

The emails are part of the committee's ongoing investigation aimed to find out whether the IRS received White House orders to purposefully delay granting tax-exempt status to Tea Party and conservative nonprofits. (Via Getty Images)

And the emails haven't helped improve Lerner's standing with conservative pundits either.

"She's a political hack, and she got that job because of her bullying skills. And you see in this email, 'Conservatives are going to destroy this country,' she was placed there by this administration to do exactly what she did." (Via Fox News)

A writer at Reason.com, a subsidiary of the libertarian Reason Foundation, takes a different approach. The outlet says it's not Lerner's political bias that's the problem, but that people who have such biases can have positions of power and can harm other parties.

As for Lerner herself, Politico reports that, through her lawyer, she maintains her innocence and this email isn't proof she had a bias doing her job but instead simply had opinions.

Lerner is getting the most attention because she was formerly the director of the specific IRS unit that handles tax-exempt applications. GOP-led House committees think proof of the scandal to discriminate against GOP groups lies in her emails.

The problem is, the IRS announced in June that it had lost two years worth of emails — including Lerner's — due to a computer crash and Lerner has previously pleaded the fifth in court. As you can imagine, Republicans weren't thrilled. (Via Forbes | Breitbart | The Washington Times)

"I am sitting here listening to this investigation and I don't believe it...that's your problem. Nobody believes you." (Via C-SPAN)

The Department of Justice has made no comment on how it will respond to this latest request by Camp.