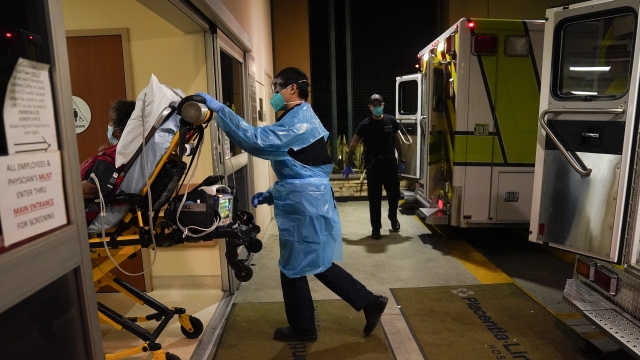 SMS
New Law Reducing Surprise Medical Billing Still Has Gaps
By Newsy Staff
By Newsy Staff
April 26, 2022
Under the "No Surprises Act," everyone who takes care of you at an emergency room will be in-network. But the law won't help every person.

We are in year one of the federal "No Surprises Act." The law that protects people from getting surprise medical bills went into effect in January, and we're just starting to see the effects of the new legislation.

Surprise medical bills often come up in emergencies when patients don’t have the opportunity to choose their providers and end up receiving out-of-network care, or when patients go to an in-network facility for a scheduled procedure but not every provider at the facility is in-network.

This can definitely be confusing to patients, so here's an example:

Let’s say you go in for an emergency surgery or c-section. There are several doctors taking care of you, from anesthesiologists to radiologists, and after all is said and done, you come to find out one of them didn't accept your insurance. Then you're slapped with a huge bill, ranging from hundreds to tens of thousands of dollars.

But under the new law, everyone who takes care of you at an emergency room or urgent care center will be considered in-network care, and for scheduled care, you should be covered as long as the facility is in-network. The idea is that, now you wouldn't be charged anything extra beyond what you'd normally pay under your current insurance plan.

But there are still some gaps.

While air ambulances are covered under the law, ground ambulance transportation is not. It’s a little more complicated, and Congress may circle back to it.

Studies show before this law took effect, 1 in 5 emergency room visits resulted in surprise medical bills, but the government estimates that this new act will apply to about 10 million surprise bills each year.

The law won’t necessarily help those who already received surprise bills before the law took effect.

Olympic cycling hopeful Phil Gaimon knows the difficulty of getting surprise medical bills all too well. After suffering a life-threatening crash during the Olympic qualifying race, he spent time in the hospital, and even with two insurance plans, he was left with $150,000 of medical bills.

"I was freaked out when it was $90,000 and the second bill came and that might have been the first time I cried in the entire accident," Gaimon said.

This new law doesn't mean that surprise medical billing completely goes away, but it should help reduce the likelihood of this happening.

But what about people who don't have insurance at all?

This law doesn't offer protections for them, and according to a study from the Kaiser Family Foundation, they're more likely to report having significant medical debt.

Another issue with medical billing is people getting a bill for something that didn't happen to you personally.

A new report from the Consumer Financial Protection Bureau found that last year, the most common debt collection issues were with medical bills that they didn't actually owe, and this problem has only gotten worse in recent years. Between 2018 and 2021 the number of these complaints jumped by 31%.

A lot of people don’t discover this is an issue until they see a sudden dip in their credit score and are told that paying these bills will fix it. That credit hit can make it difficult for them to find housing or even get a job all because of a bill for service they didn't even get.

The new legislation has addressed parts of the issue, but medical debt is still a major financial burden for Americans.