New Joe Paterno Statue Could Go Up In 2015 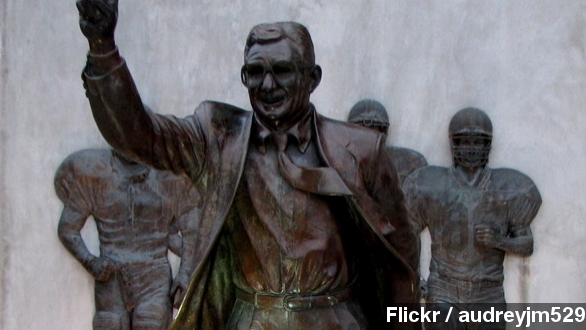 SMS
New Joe Paterno Statue Could Go Up In 2015

By Matt Moreno
April 23, 2014
A group of alumni plans to erect a bronze statue of the late Penn State head coach Joe Paterno outside of campus grounds.
SHOW TRANSCRIPT

The original statue of iconic Penn State head coach Joe Paterno came down just two years ago, but some of the school's alumni are reportedly working to erect a new one.

Penn State student-run blog Onward State reports a group of alumni is looking to put a JoePa statue about 2 miles away from the original site. The $300,000 project will reportedly show a bronze figure of Paterno sitting on a bench.

But it's important to note this statue won't actually be on the Penn State campus. It's expected to sit in the downtown area of State College, Penn.

That's because organizers of the new project say they're not sure if the university is ready for a new JoePa statue. This was the scene two years ago when the original statue honoring the late Hall of Fame coach was removed. (Via ABC)

ESPN quotes one of the project leaders as saying: "It's clear the university isn't ready to do anything; they're certainly not ready to put the statue back. That's their call."

Although Paterno was never indicted on criminal charges in relation to the Jerry Sandusky sex abuse case, his reputation was more or less ruined after it was reported he knew about his assistant coach's actions and failed to do anything about them. (Via CNN)

The legendary football coach was fired from Penn State in November 2011 and died only two months later. He coached the Nittany Lions for 61 years, including 46 years as head coach. (Via CBS)

"Joe's Bench," as the project is being called, is expected to be completed by November 2015.