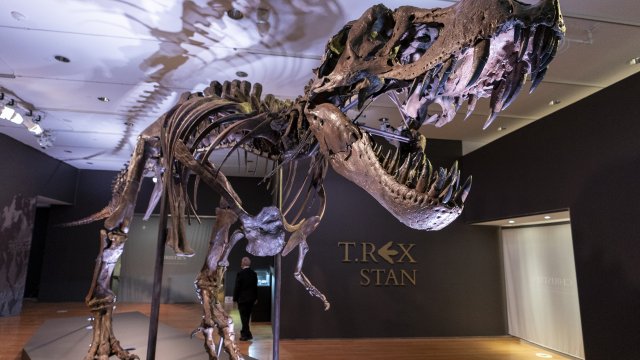 SMS
New Insight Into Tyrannosaurus Rex's Tiny Arms
By Isbella Diaz
By Isbella Diaz
April 5, 2022
Since the dawn of entertainment, the mighty T. rex has been revered for its big teeth and mocked for some lackluster limbs.

Tyrannosaurus rex: Arguably one of the most popular dinosaurs and most terrifying predators to ever walk the Earth — at least from the shoulders up. Since the dawn of entertainment, the mighty T. rex has been revered for its big teeth and mocked for some lackluster limbs.

So why exactly did this 40-foot-long, 12-foot tall carnivore have arms spanning closer to just 3-feet?

Some 65 million years after its demise, one paleontologist may have finally cracked the code. The evolutionary reason for the those tiny arms may be to protect itself from its own kind.

A new study in a peer-reviewed paleontology journal surmised T. rex likely evolved its small arms so that its forelimbs, which were “vulnerable to injury, infection, and amputation," could survive feeding frenzies with its fellow predators.

So when T. rex and his buddies shared a meal, those shockingly small arms would avoid getting bitten off. Over time, the short arms were selected for. Remember high school biology?

But like most theories about T. rex's little limbs, it’s hard to prove. So the mystery remains.