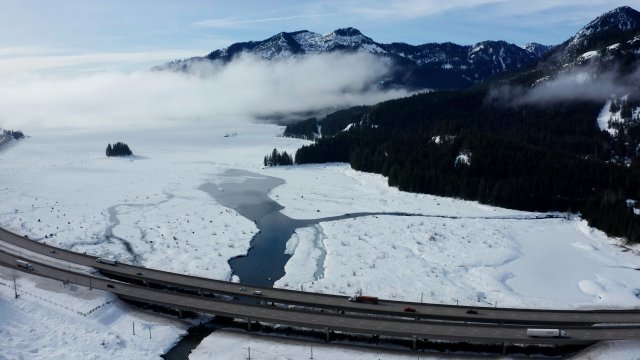 SMS
New Infrastructure Package Could Help Reduce Damage To Wildlife
By Sam Eaton
By Sam Eaton
March 10, 2022
Six-lane highways can be deadly for animals, and federal investments could prevent some of this harm.

From the air, the wildlife passage spanning Washington’s Interstate 90 looks like a bridge to nowhere. But conservation biologist Mitch Friedman says for animals, it’s a lifeline.

"For our most sensitive wildlife like grizzly bears, but even fairly abundant ones like elk, roads are death," Friedman said.

Friedman is the executive director of Conservation Northwest, a key environmental partner for the project.

"This 15-mile stretch, between Hyak and Easton, of Interstate 90 is the best in the continent or maybe the world for wildlife crossing," he said. "It's the avant garde."

In the United States, cars and trucks kill over a million large animals a year, threatening the survival of at least 21 species — from red wolves and lynx to the desert tortoise, and even two different species of salamander.

NEWSY'S SAM EATON: I know this is a big issue right now with the infrastructure bill. What is it about the I-90 corridor that is so important?

MITCH FRIEDMAN: Human infrastructure, particularly highways, divide populations. We’ve diced up the landscape and the critters with it.

Those patterns are carved into the land as Interstate 90’s six lanes, connecting commerce in Seattle with the rest of the country and slicing through the Cascade Mountains at Snoqualmie Pass.

"These animals still need to cross the landscape for migration, seasonal or generational, to move between habitats on a daily basis, to find mates," Friedman said. "They need to get around, and underpasses and overpasses put in the right places allow wildlife to do that without risk of collisions."

As part of the recently passed infrastructure package, the U.S. is about to invest $350 million — a mere .03% of the total bill — to undo some of the harm to wildlife caused by the nation’s network of roads.

On six-lane interstate highways like I-90, collisions with wildlife aren’t just deadly for animals.

"We have a lot of elk here and elk don't necessarily travel alone, they usually are in a herd, and so that really does create a huge risk," said Patty Garvey-Darda, wildlife biologist with U.S. Forest Service.

Garvey-Darda and the Washington Department of Transportation’s Brian White are inter-agency partners on the I-90 wildlife corridor.

A stretch of the highway, once completed, will not only improve its safety by preventing closures from avalanches and flooding. It’ll also host a network of more than two dozen wildlife corridors.

The fact that these investments protect both people and wildlife makes them one of those rare bipartisan issues.

"So there's the savings as far as people not getting in accidents, but also when there were accidents that also closes the interstate," Garvey-Darda said.

A single four-day closure from avalanches in 2008 cost the state nearly $40 million in lost revenue, and the annual price tag for collisions with wildlife in the U.S. is estimated at $8 billion, killing roughly 200 people a year and injuring thousands more.

"You know, if you were here before we built the improvements, there is a little bridge right here that confined the Gold Creek and the rest of that was all embankment," White said.

That means it was impenetrable to wildlife. Garvey-Darda says studies looking at GPS collar data from migrating elk showed they would stop just south of the highway, isolating the genetics of the species on each side.

"North of us is that Alpine Lakes wilderness, and on the south side is the North Peak wilderness, so this is tremendously important for the wildlife connectivity standpoint," Garvey-Darda said. "The hope is, and it surprises me — that it's working so well — the hope is that we're just mimicking the same habitat and animals just hardly notice. It seems seamless if they walk through."

The project’s timing couldn’t be better. In the U.S. only 13% of the nation’s lands and inland waters are permanently protected and managed for conservation. But biodiversity losses are accelerating due to continued habitat destruction and fragmentation, along with climate change. Four million miles of public roads in the U.S. divide those critical habitats even further, creating isolated pockets of biodiversity.

"The number one thing that animals need to respond to climate change is the ability to move, and roads make that so much harder," Meade Krosby said.

Krosby is a senior scientist with the University of Washington climate impacts group. She says the traditional model for conservation was to create protected areas, like islands of wildlife habitat off limits to human development and resource extraction.

"Those islands have been more and more isolated from each other as cities have grown and highways have been placed between them, and with climate change, it's actually a disaster," Krosby said. "Species can’t respond to climate change in these islands, they have to be able to move."

Krosby says as the government begins to fund wildlife passages as part of the infrastructure plan, I-90, because it takes climate change into account, is the ideal the template to work from.

"That should be the level of ambition that we're working towards nationally," Krosby said. "That's the direction we need to be heading in."

"Under rocks, sometimes you can find tail frogs. They’re in the stream and they attach to the bottom of the rock, and they graze on algae," Garvey-Darda said while looking under I-90.

A threatened species of trout has also begun to cross under the highway for the first time, not to mention bears, otters, fishers, and mountain lions. The list goes on, all documented by DOT trail cam footage.

"It makes me really optimistic that we can solve some of these problems," Garvey-Darda said. "We can do infrastructure, we can have highways, and we don't have to sacrifice the environment to do that. So, yeah, it's win-win."

After 25 years working to make this project come to fruition, Garvey-Darda says she hopes it’s just the beginning.