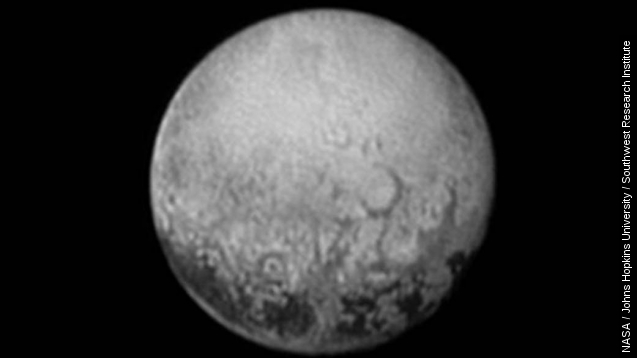 After more than nine years in transit, NASA's New Horizons probe is finally ready to fly past Pluto and give us the best glimpse ever of the dwarf planet. And if the last few days leading up to the flyby are any indication, we're about to see some pretty wild stuff.

Up until now, we had no idea what the surface of Pluto actually looked like; the icy dwarf planet is too far away for conventional telescopes to make out clearly. But the increasingly clear pictures New Horizons has been sending back have revealed dark spots and polygonal shapes on Pluto's surface — evidence of complex geology.

We'll learn more about what Pluto looks like on July 14, when New Horizons passes within 8,000 miles of the planet's surface. The probe is scheduled to take a series of observations which should tell us, among other things, the chemical composition of Pluto's surface and atmosphere.

New Horizon's mission doesn't end after Pluto; the spacecraft is slated to study one or two other objects in the Kuiper Belt, the region of small asteroid-like objects surrounding the edge of the solar system.

It will take months for New Horizons to send back all of the data it will gather during its flyby, and the information will probably keep astronomers busy for even longer. But if you want to see what the flyby might look like for yourself, you can check out NASA's animated preview app.