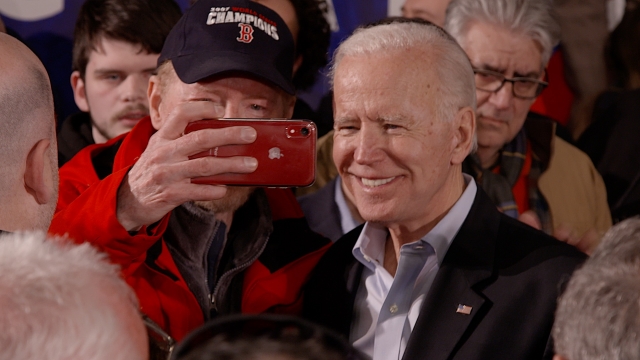 As voters in New Hampshire make their pick for president, polls show the race is tightening at the top. Former Mayor Pete Buttigieg surged in polls after virtually tying Senator Bernie Sanders in Iowa.

The Biden campaign altered its schedule, adding multiple events in the weekend leading up to primary day, including one in Manchester that voter Millie LaFontaine attended. She had been leaning towards other moderate candidates, like Buttigieg and Senator Amy Klobuchar.

"We don't need much moderates. It's too late. I'm sorry, but we don't need moderation anymore. We need somebody to change this world at this country back to where it should be," Schwartz said. "Moderates, it doesn't excite people, people right now have to be excited. And quite frankly, that's what Trump did to the far right."

"I was with Joe Biden in 2018 when he was out campaigning for congressional Democrats to win back the house, guess what? They were asking him to come into the district to campaign for them. Guess what, folks? They're not going to be asking Bernie to come in to campaign for them," said Biden supporter Fred LaRiccia.

"It's a marathon. It's not a sprint. So I don't worry about that at all. And you know, if you come to me and say he came in fourth in South Carolina, we can talk," he said."