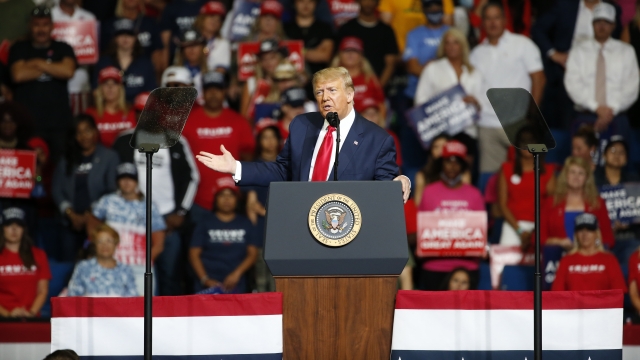 President Donald Trump's planned rally for Saturday in New Hampshire has been postponed due to Tropical Storm Fay.

The event would have been the president's second large-scale rally during the coronavirus pandemic and was set to take place despite warnings against mass gatherings of people.

A health official in Tulsa, Oklahoma, recently named the president's rally there in late June as one of several events "likely" responsible for a local uptick in coronavirus cases — something the campaign disputes.

Paul Monies is a reporter who covered the rally in Tulsa and tested positive for COVID-19 shortly afterward. Although he can't exactly say if he contracted the virus at the rally, he's urging people thinking of attending these events to be cautious.

"You got to take precautions and kind of be knowledgeable of the risks that you have just personally," said Paul Monies, a reporter for Oklahoma Watch. "You know, I do think the Trump campaign tried, at least in the arena in Tulsa. [They] gave out hand sanitizers, they gave out masks. It was personal your personal choice to wear them or not."

The New Hampshire rally was planned to take place outdoors at an airport, potentially allowing for more social distancing. The president has been eager to return to regular campaigning as his approval ratings slide. A recent ABC News/Ipsos poll found that 67% of Americans disapprove of President Trump's handling of the pandemic.

The campaign, however, says it isn't worried about surveys showing presumptive Democratic nominee Joe Biden with a lead in key states.

"We see the internal numbers and that, and [those] are all very positive and looking good for us, [and] that when people know about Joe Biden and his record, they're going to choose President Trump," said Marc Lotter, the director of strategic communications for the Trump campaign.

The New Hampshire rally will likely be rescheduled within the next two weeks.