New Gun Restrictions Are Unlikely In The Near Future 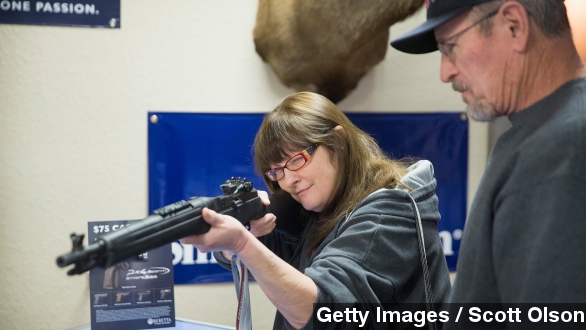 Support for gun rights is up. That’s according to data from the latest Pew Research Center survey.

Up since the Sandy Hook Elementary shooting in Newtown, Connecticut two years ago.

“Evil and good are human terms… These things are just a tool. … It can be used for good or it can be used for evil,” Jim, a gun owner, once told us. Jim asked that we not use his last name.

Gun rights activists have maintained that stricter controls on the ownership of guns is a tactic aimed at the wrong target.

“It was like going to get a candy bar. Oh yea, we can go get a gun, we know just where to get them. … Naturally you have to think of access,” said St. Louis-area Reverend Rice.

While others believe access is an issue — that it’s too easy for the wrong people to get their hands on deadly weapons.

“We can still bring about meaningful changes that reduce gun violence, so long as the American people don’t give up on it,” President Obama said in 2013.

President Obama has been an advocate for tougher gun laws, tasking Vice President Joe Biden with pushing something through.

But considering the increase in public opinion in favor of gun ownership — and a newly elected, Republican-controlled Congress — new restrictions on access to guns isn’t terribly likely in the near future.

FBI statistics, by the way, indicated a major uptick in gun sales this past Black Friday — with a record 175,000 background checks that day. (Video via CNN)