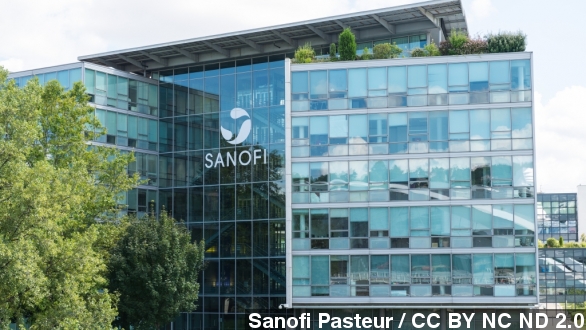 A new diabetes drug was approved by the Food and Drug Administration Wednesday. It doesn't sound like breaking news, but for the company behind the drug, it's a pretty big deal.

The French drugmaker Sanofi is now able to sell its drug Toujeo in the United States. And Sanofi is likely thanking its lucky stars.

The Wall Street Journal described it as a "crucial launch" for Sanofi as it struggles "to keep a firm grip on the all-important diabetes market."

Diabetes keeps the body from properly absorbing blood sugar. Blood sugar is essentially food for the cells in your body.

There are two types of diabetes, very originally named Type 1 and Type 2. Type 1 diabetes is when the pancreas — the organ responsible for insulin, which gets that blood sugar into your cells for energy — produces very little insulin or none at all. There's no cure, but it can be managed.

Type 2 diabetes is when your body resists insulin or simply doesn't make enough. The condition is usually manageable with a healthy lifestyle.

The diabetes market generates $38 billion yearly in sales, according to The Wall Street Journal, citing an evaluation group. So it's a lucrative industry to have a hold on.

Sanofi already has an insulin drug on the market, Lantus. It treats both types of diabetes. But really, there isn't a huge difference between Lantus and Toujeo.

Lantus is the world's top-selling diabetes drug. It lowers glucose, or sugar levels, in the blood. It's a long-acting form of insulin.

Toujeo is dosed differently than Lantus and is also a long-acting form of insulin.

Sanofi is expected to lose its U.S. patent protection on Lantus later this year. And without any real reason for the health care industry to switch from Lantus to Toujeo, there needs to be some kind of incentive, right? (Video via U.S. Food and Drug Administration)

Well, there might be. Some are already questioning if a price war will get people to switch to Toujeo. FierceBiotech writes:

"That is likely to set up some early price discounting that will further roil the huge and growing diabetes market for all the key players."

Sanofi hasn't said how much Toujeo will cost, but it's expected to be available in the U.S. in April.