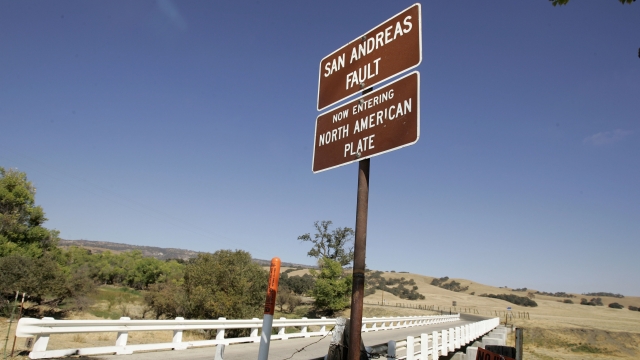 The San Andreas Fault in California is long overdue for a major earthquake — like, more than 100 years overdue. But scientists just made a discovery that might tell us why the fault has been so quiet.

It's called the Salton Trough Fault, and it lies along the northeastern edge of the Salton Sea in Southern California. The fault line is underwater, so scientists didn't find it until recently.

Scientist believe the Salton Trough could be absorbing strain from San Andreas. That might explain why a major earthquake hasn't occurred along the San Andreas in more than 300 years.

SEE MORE: Don't Freak Out About California's Swarm Of Earthquakes Just Yet

And Southern California has been waiting for the "big one." A series of small earthquakes earlier this year caused worry among residents and scientists.

"Any time there is significant seismic activity in the vicinity of the San Andreas Fault, we seismologists get nervous," one specialist told The Los Angeles Times.

The "big one" is a hypothetical earthquake with a magnitude predicted to be greater than 7. Southern Californians have anticipated such a quake for a long time.

To put that in perspective, the 2010 earthquake in Haiti was a magnitude 7. The Haitian government's official death toll for that quake was more than 300,000 people. And the earthquake leveled the areas it struck.

But scientists say the Salton Trough still needs to be researched. When that series of small earthquakes hit San Andreas earlier this year, one seismologist noted the lack of records on the Salton Trough makes it difficult to see if the two faults affect each other at all.