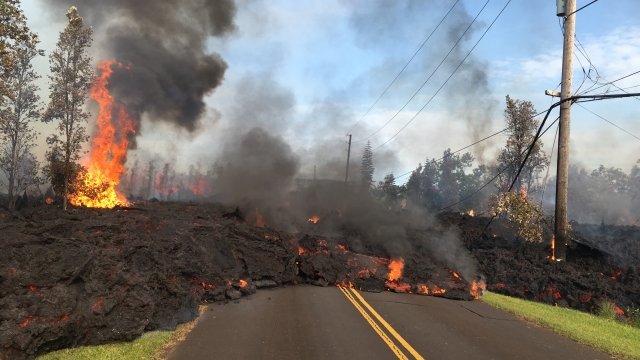 SMS
Officials: Hawaiians Can Go Home, Briefly, Amid Air Quality Warnings
By James Packard
By James Packard
May 6, 2018
Hawaiians were told to stay away from areas near Hilo on Sunday after new fissures opened on the Kilauea volcano.
SHOW TRANSCRIPT

Authorities in Hawaii said Sunday they would start letting people in evacuation zones return to get pets and items left behind when they fled from volcanic eruptions. They warned, though, that the air quality was bad and that people should leave again as soon as they have what they need.

Hundreds of people on the Big Island have evacuated. Authorities say six homes have been destroyed. Officials had said Friday that people who left items behind in their homes might be able to return for them, but the new eruptions disrupted those plans.

In addition to the new fissures, officials are warning people about the potential effects of the sulfur dioxide the volcano is putting into the air. It can irritate the nose, throat and eyes. It can also make breathing difficult. Experts say the sulfur dioxide could effect people across multiple islands depending on how long the eruptions last.