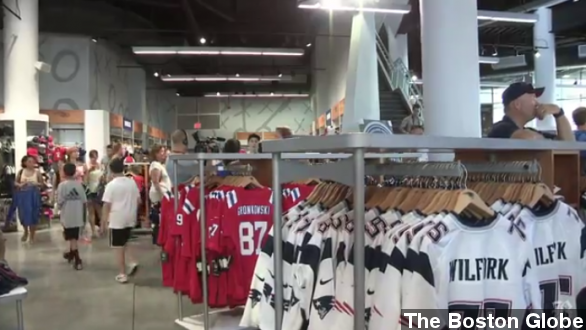 ​Next time you're left with a useless jersey after your favorite NFL player is traded away or cut, don't worry about it! At least, as long as you're a New England Patriots fan.

The Patriots introduced a "Jersey Guarantee" program on Thursday, protecting fans who shell out hundreds of dollars for players that might not last on the New England roster. (Via NFL)

Starting Thursday, if fans buy a jersey on the team's site or at the stadium and that player leaves the team within one year, the fan can buy any other jersey with a 25 percent discount for two months following the departure. (Via NFL)

The policy is the first of its kind in any of the big four sports leagues, and it's no surprise that the richest league is promoting the deal.

It's also no surprise that the offer is debuting in New England — as Bleacher Report writes, "This is an intelligent move by a franchise that has continued to prove its salt in matters of business and public relations over the last year."

If the deal is expanded, the real winners could be fans of teams constantly on the QB carousel, like the so-called "cursed" Cleveland Browns and the much-maligned Minnesota Vikings. (Via Yahoo, Sports Illustrated)

Patriots fans might wish they'd had this deal when controversial quarterback Tim Tebow signed last year, briefly causing a flurry of headlines and jersey sales, before being cut a few weeks before the season even started.

But it's not the first time New England has held this kind of deal. Last summer, the team offered a free jersey trade-in program after Aaron Hernandez, a former tight end for the Pats, was arrested in connection to a murder case. (Via WPRI)

According to NESN, the team lost almost $250,000 after 1,200 fans came in to dump their Hernandez jerseys. (Via The Boston Globe)

No word from the NFL on whether the program will be expanded to other teams.