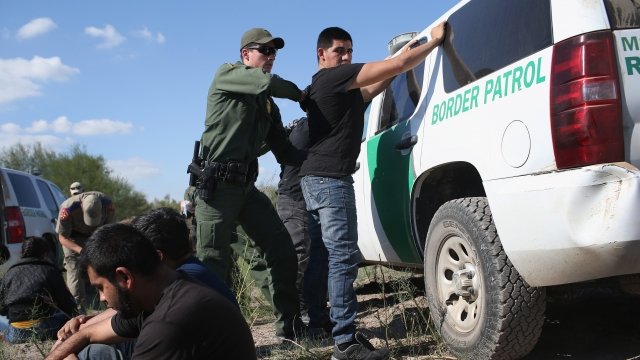 The secretary of Homeland Security says the measure will "bring the illegal immigration crisis under control."

A new Trump administration policy will force some asylum-seekers who enter the U.S. via Mexico to return to Mexico while their asylum cases pend.

Secretary of Homeland Security Kirstjen Nielsen made the announcement Thursday. She said the measure will "bring the illegal immigration crisis under control."

The Department of Homeland Security says an influx in asylum claims in 2016 led to the decision. DHS says it's currently working through a backlog of more than 786,000 pending cases.

Nielsen claims asylum-seekers have been "trying to game the system to get into our country illegally." She says many enter the U.S. without proper documentation, skip their court dates and vanish into the country.

"We have tens of thousands of illegal aliens arriving at our doorstep every month. We have drugs, criminals and violence spilling into our country every week. And we have smugglers and traffickers who profit from human misery every single day by exploiting people who are seeking a better life," said Nielsen.

The new policy would apply to migrants who apply for asylum as well as those who cross the border illegally. Under the policy, which takes effect immediately, Nielsen says the U.S. will replace its so-called "catch and release" policy with "catch and return."

DHS says the measure is in line with the U.S.' humanitarian commitments as well as "all domestic and international legal obligations."

And Mexico is reportedly standing behind the decision. DHS says it "expects" the Mexican government will provide asylum-seekers with visas, work authorization and other protections while their cases are processed.