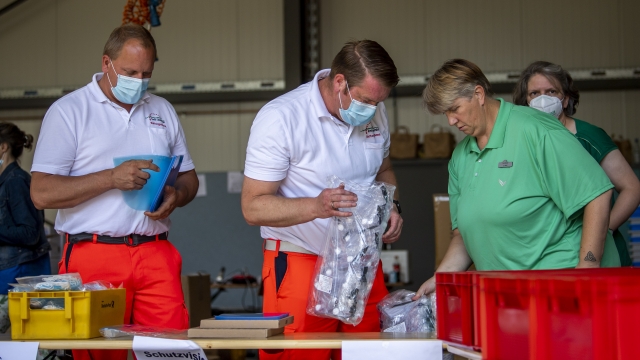 SMS
Part Of Germany Goes Under Lockdown After New COVID-19 Outbreak
By Katherine Biek
By Katherine Biek
June 23, 2020
The entire district of Guetersloh will be locked down until at least the end of June. About 360,000 people live there.
SHOW TRANSCRIPT

Part of Germany is back under restrictive lockdown measures following a new coronavirus outbreak linked to a meatpacking plant.

Officials in the German state of North-Rhine Westphalia announced Monday that the entire district of Guetersloh will be locked down until at least the end of June. About 360,000 people live there.

Under the new restrictions, schools and non-essential businesses are shut down. Restaurants are only allowed to serve take away food. And gatherings of more than two people are banned — with exceptions made for families and people who live together.

All 7,000 people who work at the meatpacking facility will self-quarantine at home, after more than 1,500 of them tested positive for COVID-19.

The head of the plant said on Twitter that the company accepted responsibility for the outbreak and that it would pay for people in the district to be tested.

This marks the first local lockdown in the country since Germany started easing national restrictions back in May. Since then, German Chancellor Angela Merkel passed responsibility for reopening to the states. Under that plan, state authorities are required to reimpose preventive measures if the number of new infections rises high enough.