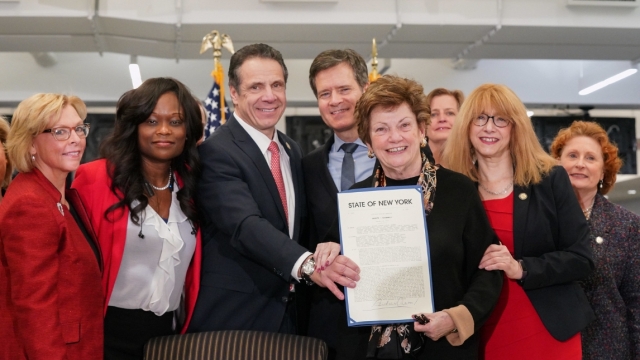 At 12:01 Wednesday, a new law went into effect in New York, allowing people to filed old civil claims for child sexual abuse. And there have already been hundreds of claims filed.

The New York Child Victims Act creates a one-year window for people who say they were sexually abused years ago to file claims, even if the statute of limitations has passed and no matter the victim's age now.

Before, alleged victims had to file a lawsuit before they were 23 years old. But, experts say it often takes a long time for victims to come to terms with their abuse, or are too ashamed or fearful to speak out until later in life, after it's too late to seek damages from their abusers.

It also extends the statute of limitations for victims to file criminal lawsuits against an abuser, until the victim turns 28. And alleged victims can file civil suits until they turn 55.

This was introduced as legislation in January and  signed into law in February by Gov. Andrew Cuomo. Cuomo said this is "society's way of saying we are sorry." Lawyers say some victims could be filing 50 or 60 years from the time they were abused.

Victims have fought for this legislation for years after arguing the statute of limitations were too restrictive and didn't allow victims to process what happened to them before filing against their abusers.

One attorney called New York's statute of limitations "one of the most restrictive rules in all of the United States of America and because of that rule, there were multiple generations that were kept from the justice available in the courts." He continued by saying "these cases will expose dozens of perpetrators whose identities have been kept secret by the institutions that protected them."

Under this law, the institutions connected to the alleged abusers could be held liable as well. According to a spokesperson for the state court system, lawsuits are expected to be filed against the Archdiocese of New York, Jehovah's Witnesses, Rockefeller University, the  Boy Scouts and Jeffrey Epstein, among other alleged abusers.

New York has been preparing for the wave of lawsuits, setting aside 45 judges, including 12 in New York City, to work on these cases exclusively.

Child sex abuse victims from the Zero Abuse Project released a joint statement saying it is both heartbreaking and encouraging to see the amount of lawsuits filed. The statement says the CVA gives victims the power and ability to come forward, find justice and hold people accountable. They said "It is indicative of just how deep-rooted the problem of child sex abuse is in our country."