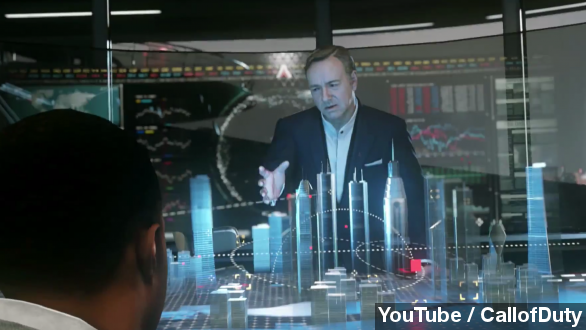 News about the next "Call of Duty" game was supposed to be released this Sunday, but someone might have jumped the gun on the announcement.

After an audio clip, screen shots and even the official trailer leaked Thursday, Call of Duty's official Twitter account finally gave in to rumors, saying: "This was scheduled for Sunday but it just leaked, so why wait? Here's the first look at Call of Duty: Advanced Warfare."

The leaks were reported by multiple websites, and here's how how an announcement for one of the biggest video game franchises was quickly discovered days before its official release.

It all started Thursday morning when Sledgehammer Games, the development team behind the game, went on Twitter and teased about "#ANewEra of @CallofDuty," giving May 4 as the date for the announcement. Then, Game Informer announced that its next issue would have the game on its cover as well as in the magazine's main feature.

After that, the franchise's Twitter account showed a minidocumentary produced by Vice about the rise of private military corporations, suggesting the theme of the game's story. But the biggest surprise was yet to come. (Via Twitter and YouTube / Call of Duty)

Variety obtained an audio clip of the game with a voice that sounded very similar to Kevin Spacey, the actor who plays the notorious and power-hungry Frank Underwood in Netflix's "House of Cards." By running the audio through a sonic visualizer, a tool that converts audio into an image, it was revealed that the same clip created the image of a man holding a gun. Spacey's appearance was then confirmed with a short trailer.

"Ideas don't determine who's right. Power determines who's right, and I have the power, so I'm right." (Via YouTube / Call of Duty)

But it was Destructoid that had the last word with multiple screen shots and the release of the official trailer. The video further confirmed Spacey's appearance not only in voice but as an actual character in the game, which features futuristic weapons and equipment. (Via YouTube / Call of Duty)

When the trailer was officially revealed, fans took to Twitter to talk about the game. Early Friday, "Call of Duty," "Advanced Warfare," and "Kevin Spacey" were all trending topics in the U.S. Reactions are mixed, ranging from excitement to disbelief that another game is already announced when the latest game in the franchise, "Call of Duty: Ghosts," was only released this past November. (Via Twitter)

However, people seem to like Spacey's appearance, and some are combining his most famous role to date with the franchise, calling it "House of CODs." (Via Twitter)

More information is bound to pop up in the coming months, especially during the Electronic Entertainment Expo this June. The game is set to be released Nov. 4.